The Trump Deal – a complete sham 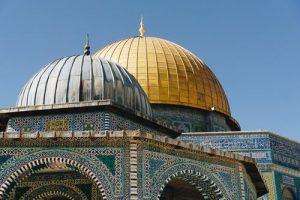 When we read the Quran, we come across the words jaadila, ujaadila, jadal and mujadiloon, which mean argumentation and they crop up in more than 20 verses.

Sadly, argumentation has become a profession. We have spin doctors, whose job it is to change the truth. To twist it and come up with arguments to prove others wrong, even when they are right.

This is what we have seen in the deal Trump has presented on Israel. He has changed the truth and planted falsehood in its place, while claiming that they are peaceful. This is jaadilah.

No matter how you dress it up, you cannot change the truth

No matter how strong someone might be with their arguments, or how much money they have, or power and authority, they can get away with making what is right wrong and what is wrong right.

Even if they change the name of the capital – it is still Bait al Maqdis and Al Quds. It is still our capital. No one can take it from us.

As Emily Thornberry – Shadow Secretary of State for Foreign and Commonwealth Affairs eloquently put it:

This is not a peace plan it is a monstrosity, and a guarantee that the next generation of Palestinian children will grow up knowing nothing but fear violence, and division. But Trump and Netanyahu care nothing about those children’s futures they only care about their own.

The question is have today is what on earth our PM and Foreign Secretary are going along with this peace deal and saying that Palestine should get behind it. that it is a shameful betrayal of decades of consensus across this House and from one government to another. That we should unswervingly and neutrally support progress towards a two state solution, a prospect that this rips away.

The truth will prevail

Allah Almighty has promised the believers that they will get their rights. It is a matter of time, it might take a couple of years, or a hundred years. In the lifetime of nations, a hundred is not much. Our message started with Adam, to Nuh, to Ibrahim, to Eesa and Muhammad (peace be on them) so it might take a while, but Allah Almighty will make the truth prevail and the land will go its owners.

The deal is nothing but apartheid. It is not peaceful at all. It is legitimising the settlements on land stolen from the Palestinians. It goes flagrantly against UN resolutions.

As long as you have power you can get away with this theft in broad daylight. If we as Muslims went against one UN resolution, there would be an uproar. Yet Israel holds the record for ignoring United Nations Security Council resolutions.

A catalogue of injustice

Stand up for the truth

Even if we are betrayed by our own brothers and sisters, we need to strive for the truth. In the hadith the Messenger of Allah (ﷺ) said:

Mu’adh said: and they are in Shaam. (Bukhari and Muslim)

It is a promise. Nevertheless we do not just believe in the promise and do nothing. We need to do our best in the best possible, legitimate ways. We have to defend our rights, online, offline, lobbying,  campaigning, on the streets. No matter what spin doctors do to our reality, we can still uphold the truth and our rights. Allah will support His servants as long as they support each other.

Abu Hurairah (may Allah be pleased with him) narrated that the Messenger of Allah (ﷺ) said:

If anyone relieves a Muslim believer from one of the hardships of this worldly life, Allah will relieve him of one of the hardships of the Day of Resurrection. If anyone makes it easy for the one who is indebted to him (while finding it difficult to repay), Allah will make it easy for him in this worldly life and in the Hereafter, and if anyone conceals the faults of a Muslim, Allah will conceal his faults in this world and in the Hereafter. Allah helps His slave as long as he helps his brother. (Muslim)

Al Quds and Palestine is the property of the Palestine and the Muslim ummah. It is not just for the Palestinians to defend themselves. But the ummah has to come together against this lunatic Trump and those who follow him.

Imagine someone evicted you from your home, and then he agreed to put in the shed, and if you complain, he calls you a terrorist, and says ‘We want peace; just give us your house and your shed. This is our property.’ The truth will prevail, but Allah Almighty says

Of the believers are men who are true to what they pledged to God. Some of them have fulfilled their vows; and some are still waiting, and never wavering. (33:23)

Allah Almighty said men (rijaal) who are faithful to their covenant are believers, so we need men of truth to carry this burden. Unfortunately, we don’t have so many men in this day and age. We need to be up to the challenge.

Challenges are not decreasing. But increasing. So we need understand our history. We need to know our rights and defend them. We must not give up. No matter what the pressure is upon us, we must not give up. The whole ummah should come together. I know we are scattered and many of our leaders are afraid. This is why we Israel is enjoying their unbridled illegal expansion, because we are disunited more than ever. We need to unite ourselves.

We ask Allah to enable us to be those who make a difference to reality and make it better. Ameen.

Khutbah delivered by Shaykh Haytham Tamim on 31st January 2020 at the Albanian Mosque. Transcribed by A Khan.