The Sunnah is more than a collection of isolated words and actions. It is broader than that.

How do you define what is Sunnah 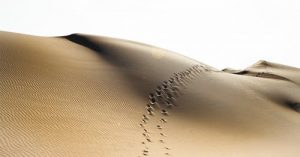 The word Sunnah is an Arabic word meaning ‘tradition’ or ‘way.’

Defining the Sunnah is a complicated task, as it has to be understood in context and in its entirety to understand the way of the Prophet (peace be on him): it means understanding what he said and how he did things.

It is wrong to take an incident or part of the Sunnah and treat it as all of the Sunnah – plucking an instance where he said or did something and then use that as a licence to repeat that particular aspect in all scenarios. Nor can you stretch the definition of the Sunnah.

Therefore to say it is Sunnah to eat meat once in 3 months is misleading. Similarly saying that wiping over (khuf) leather socks is the Sunnah is incomplete unless you appreciate that not wiping over socks is also the Sunnah.

The Sunnah isn’t a single instance. It stretches over 23 years

To say that Prophet (peace be on him) only ate meat one in 3 months is only true for part of his life. It is not true to infer from this that he did this his entire life, from birth to death. In fact Aisha (may Allah be pleased with her) said that days would go by and we would survive on just the two black things referring to water and dates. Aisha narrated that:

The Prophet died when we had satisfied our hunger with the two black things, i.e. dates and water. (Bukhari)

Similarly, the Prophet (peace be on him) wore leather socks on cold days during his travels and when he did so, he wiped over them as part of the ablution. This was the exception to the norm. So if you see the overview – the Sunnah includes wiping over sock some times, but washing the feet at others. Indeed washing the feet is the dominant Sunnah, as wiping is an occasional Sunnah when the situation requiring it arises. To take say wiping is the Sunnah and then to wipe 365 days of the year on that basis would be an incorrect application of the Sunnah.

Understanding the local context of the Sunnah

There is also another fundamental consideration when understanding the Sunnah and that is the Sunnah is supported by revelation but also informed by the habits and customs specific to certain communities. At the time of the Prophet (peace be on him) there were certain tribes which ate lizards, but when a lizard was offered to the Prophet (peace be on him) on one occasion, he refused to eat it, saying it was unfamiliar to him, but he didn’t stop those that were from eating it and some companions ate it.

Understanding the Sunnah correctly requires discipline and knowledge; one needs to evaluate the environment, the local customs, habits and diet, and the revelations associated with the subject of study. It is only when these factors have been understood that one can define the Sunnah accurately.

Fiqh vs hadith definitions of Sunnah

Scholars of fiqh (legal rulings) and scholars of hadith have different definition of Sunnah.

In fiqh, scholars differentiate between what is fard (obligatory) and what is Sunnah (recommended). The Sunnah has further sub-divisions between what are highly recommended acts and what are less important.

The word Sunnah (practices of the Prophet, peace be on him) is also used by the fuqaha (those who give legal rulings) as an antithesis to what is biddah (innovation).

Sunnah is also divided into what is Islamic guidance (huda), for example how to pray, and what is additional, for example the details of how the Prophet (peace be on him) slept, and ate etc.

The Sunnah is an example for all times and places

Some people stretch the concept of biddah to freeze people in time and place. The mentality is to classify anything new as bidaah to be on the safe side is over simplistic, inflexible and unhelpful. In fact we need a proper understanding of what does and does not count as biddah. However, a beautiful point to remember is that Prophet’s (peace be on him) Sunnah has depth and inclusivity: his single life holds the breadth and variety of actions and words to suit different people of various cultures, communities and personalities, from the time he walked the earth till the end of time as we know it, to copy him and reach their full potential in the wilful obedience of Allah Almighty.

Islam has clear boundaries of halal and haram at the same time it has the depth and breadth to make it inclusive and rich and practical for all times and the Prophet’s (peace be on him) life is a practical demonstration of that.

The Sunnah is the way of moderation

So, to answer the question of the Prophetic way of eating meat would be to understand all of his diet and learn from it.

The principles by which Prophet (peace be on him) dealt with the issue of consumption be it meat or other things included avoiding excessiveness, greed and adopting moderation and balance. It is with these very principles as foundation that we can work together as a community to understand and devise solutions to the environmental and other challenges we face. It’s important to teach our children these principles from a young age too.

The Prophet (peace be on him) led by example and his companions copied everything he did. One companion, Abdullah ibn Umar was so keen that he sometimes went to extremes. Rather than forcing children to adopt certain Sunnah practices, we should foster the love of the Prophet (peace be on him) in them, so that they themselves want to be like him. This will help us to follow his Sunnah. And if we want our children to behave a certain way, then the best way is to lead by our own example.

These days with the challenges we face to the deen and aqeedah, our priority should not be to focus on the details of the Sunnah – the length of the beard etc, but to ensure we are secure in our fundamentals. If it is a choice between your dress and your character, character takes precedence. It is crucial. Therefore the primary focus has to be behaviour.