RIBA – Worse Than Any Other Vice

Neither Wrong Nor Be Wronged 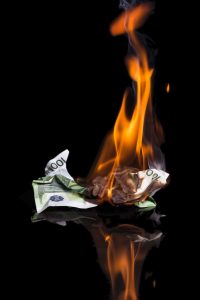 What is riba? How bad is it? Why did Allah Almighty ban it?

Finance is so complicated now. Aren’t times different now from then. Do the ayahs on riba still apply today?

At the time the Qur’an was revealed, an atmosphere of greed and exploitation prevailed and society was steeped in ‘riba’. The ayahs prohibiting riba came as a massive shock and challenge to the community. It is still a challenge for us today.

Riba literally means increase. Known widely as ‘interest’ and ‘usury’, it is the charge levied for ‘using’ money. In other words, it is where one party makes a profit through lending to another party.

It is the increase of money without risk and without effort.

Does Riba only apply to money?

Riba can apply to any loan which brings benefit to the lender or has a gain tied in to it. It doesn’t have to be financial.

Riba is when the lender gets his loan back AND MORE.

How is Riba different from trade?

People have argued since the revelation of these ayahs that riba is the same as trade. Allah Almighty, All Knowing rejects this argument. Money is not a commodity. It is not an object that is for sale. The paper it is printed is not worth anything itself. Profit should be linked to real business, whether it is the sale of a commodity or a service.

Investments should have an element of risk as well as effort.

In conventional lending, the return of the principal plus extra is guaranteed. By the time the original amount is returned the amount paid back could be many times the original sum loaned.

In Islamic finance, the lender has a share in the profits which may be variable. In a mudarabah (partnership), one party extends the capital and the other offers experience or knowledge to create an enterprise where profit and risk are shared.

Was Riba only banned for Muslims?

Unlike the ban on alcohol which was only revealed to Muslims, riba had been forbidden to the People of the Book who preceded us. Jewish people were barred from charging and paying interest which is called ‘ribit’ in the Torah and is unsurprisingly similar to the Arabic word.

Both alcohol and riba were among the last things to be prohibited. Like the ban on alcohol, which was revealed gradually at a time when drinking alcohol was the norm and not drinking seemed unthinkable, riba too was widespread and consequently forbidden progressively in four stages.

Initially it was discouraged in Makkah in surah Ar Rum, then in Madinah there were three further phases: there was a warning, followed by a clear prohibition and ultimately Allah Almighty gave a stern, lengthy and detailed warning against those who were dealing in it.

How does Allah Almighty view Riba?

The imagery of the Qur’an makes it absolutely clear just how repulsive riba is to Allah Almighty. His condemnation is explicit and terrifying:

Those who take riba (usury or interest) will not stand but as stands the one whom the demon has driven crazy by his touch. That is because they have said: ‘Trade is but like riba.’, while Allah has permitted trade, and prohibited riba. So, whoever receives an advice from his Lord and desists (from indulging in riba), then what has passed is allowed for him, and his matter is up to Allah. As for the ones who revert back, those are the people of Fire. There they will remain forever. (2:275)

Allah destroys riba and nourishes charities, and Allah does not like any sinful disbeliever. (2:276)

Surely those who believe and do good deeds, and establish Salah (prayer) and pay Zakah will have their reward with their Lord, and there is no fear for them, nor shall they grieve. (2:277)

O you who believe, fear Allah and give up what still remains of riba, if you are believers. (2:278)

But if you do not (give it up), then listen to the declaration of war from Allah and His Messenger. However, If you repent, yours is your principal. Neither wrong, nor be wronged. (2:279)

If there is one in misery, then (the creditor should allow) deferment till (his) ease, and that you forgo it as alms is much better for you, if you really know. (2:280)

Be fearful of a day when you shall be returned to Allah, then every person shall be paid, in full, what he has earned, and they shall not be wronged. (2:281)

From hadith we know that the Prophet (peace be on him) informed us:

‘Allah Almighty has cursed the one who consumes Riba (interest), the one who gives it, the one who records it and the witnesses’ as ‘they are all the same.’ (Sahih Muslim)

‘Riba is of seventy two types; the least of them is equivalent (i.e. in sin and filthiness) to a man having intercourse with his mother.’ (at Tabrani, al Hakim)

There is no other vice that evokes so much outrage in the Qur’an as riba.

What is Wrong with Riba?

Riba is basically dhulm (oppression). It is economic injustice which we can see at personal, national and global level.

It means that wealth is concentrated in a few hands. Today 80% of the world’s wealth is controlled by just 20% of its people. This results in power being limited to the super-rich and wielded unfairly at a social, economic and legal level.

The one with capital has the upper hand in every way.

It is lazy and greedy economics – the big guy bears no risk. He wins every time. He sets the rate and retains power, while the borrower remains indebted to him. The little guy doesn’t stand a chance.

In the poorest countries we see the enslavement of entire communities of impoverished people through exploitative debt. Children are being born into slavery.

What System does Allah Almighty Want in its place?

Allah Almighty extends mercy and justice to people and expects that to spread between His people. He wants us to be free from financial slavery and debt. Anything unjust is hated by Him .

Islam is balanced between capitalism and socialism.

The West glorifies capitalism, but while Islam respects people’s wealth, it also encourages the circulation of wealth. Communities should be collaborative. Islamic ethos has three elements: charity, the spirit of collaboration and kard-e-hasana (interest free loans). You can’t have one strand – you need all parts functioning for a healthy financial environment. In this scenario, transactions are blessed and flourish.

I am trapped in transactions that contain Riba. What should I do?

Allah Almighty takes barakah out of rizq when it is not halal and we are witnessing today that there is very little barakah in our wealth, compared to the old days when people’s money seemed to stretch further. Instead Allah Almighty incentivises us by offering to multiply the reward of charity. Steering us towards what is beneficial for others but enriches us at the same time.

Find alternatives to riba based transactions and seek Allah Almighty’s help and support to extricate us from our disastrous predicament.

If you don’t give up riba, it means your imaan is weak. Allah Almighty says those who repent will be forgiven. Those who continue will burn in hell.

In the Prophet’s (peace be on him) Final Sermon, he set the precedent from that day and others were to follow suit. He declared that his Uncle Abbas, who was a money-lender, wrote off all the interest on the loans he had given, but was recalling his capital. The message is clear: Give up riba and start fresh. Do not oppress others and do not let ourselves be oppressed.

May Allah Almighty give us all the strength to make the right choices when it seems our needs are unending but our options are severely limited. Following Allah Almighty’s commands to our best ability will create a more just society.

Is My Du’a Blocked?