This assembly was originally written and delivered in the same week as the Muslim ban was announced.

Muslims have been persecuted for as long as they have existed; the Prophet Muhammad (peace be upon him) and his early followers endured torture, murder and starvation, among other things, from the people of Makkah for twenty years, until the people accepted Islam. Then, they endured the Crusades in the Middle Ages, and, sadly, this hasn’t gone away even today; if anything it has increased in recent years.

The Rohingya crisis has been getting more attention in the mainstream media recently, but many people still think it hasn’t had as much coverage as it should have. And in fact, for an issue going back decades, it’s taken a long time for the world to start paying attention to it.

The Rohingya people are natives of the Rakhine state in west Myanmar, a mixture of indigenous people, and settlers, mostly from the eighteenth century and some even going back to the 1430s. However, despite the fact that they have lived in the region for hundreds of years, the government of the country refuses to acknowledge them as citizens, claiming that they are illegal immigrants who came into the state escaping the war in Bangladesh in the 1940s. As a result, under a 1982 law, any Rohingya who cannot provide ‘conclusive evidence’ that their ancestors settled in the area before the year 1823 are not considered citizens.

Consider how difficult it must be for rural farmers to provide proper documentation of their family trees tracing back three hundred years. How many of you would be able to give evidence of your ancestors from the seventeen hundreds? As a result, whether their families settled in Myanmar before 1823 or not, the majority of Rohingyas have been unable to obtain citizenship: out of the 1.3 million Rohingyas in the country, only 40 000 of them – 3% of the population – legally exist; 1 in every 7 stateless people in the world is a Rohingya.

Not being considered citizens means the Rohingya are denied basic rights; they suffer restrictions on their freedom of movement, limited access to education, and random confiscation of property, but in fact the 1982 law is only a small part of the issues they face. There have been tensions between the different ethnic groups in the area for hundreds of years, which have led to discrimination and oppression by the more powerful majority of Burmese Buddhists, against the minority Muslim Rohingyas. International media and human rights organizations have described Rohingyas as one of the most persecuted minorities in the world, and the United Nations has called the violations against them ‘crimes against humanity’.

Much of the Rohingya’s land has been confiscated by the military to give to Buddhist settlers to the area. Forced, unpaid labour is common; children as young as seven have been seen working on task such as road repairs, and people who refuse or complain are threatened, sometimes with death.   Cases of rape, torture and violence are common, but largely go unreported as law enforcement officers take no action.

In recent years, concerns have been growing that systemic oppression in Myanmar has increased to the point of genocide; since 2012, reports are more and more common of beheadings, beatings, and even whole villages being burned to the ground. In 2015, Al Jazeera news channel’s Investigative Unit discovered evidence that government agents had been involved in triggering anti-Muslim riots through hate speech and hiring ‘thugs’ to stir ill-feeling. However, the Burmese government continues to deny these reports and the international community refuses to take action.

In 2015, due to increasing violence, many Rohingya people fled to Southeast Asian countries, such as Malaysia, Indonesia and Thailand in unsafe boats, similar to the Syrian refugees crossing the Mediterranean. In just three months between January to March 2015, an estimated 25 000 people were taken to boats by human traffickers; many of them were then abandoned at sea. Unfortunately, the refugees who did safely – in relative terms – manage to reach other countries, are not welcomed by their host countries. These countries do not recognise them as refugees and do not protect them, and so they live in poverty, highly vulnerable to exploitation by organised crime gangs.

In 2016, nine police officers in the Rakhine State were killed by a Rohingya insurgent group. In retaliation, the Myanmar military started a crackdown on the Rohingya Muslims, with what most of the world considers unnecessary violence and multiple violations of human rights. Twenty-five-year-old Noor Ankis told the Telegraph she was told to kneel to be beaten, before being taken to a place where women were raped, while Sufayat Ullah – twenty years old – returned home to find that soldiers had burned his family home to the ground, and his parents and two brothers had suffocated inside. More than 65 000 Rohingya have fled the country just since last October.

This crackdown has been criticised by the UN, Amnesty International and the US Department of State, among other organisations. Nobel Peace Prize winner Aung San Suu Kyi, not the president but basically in charge of the country, has particularly received censure for not saying or doing anything about the issue. In December of 2016, twenty three prominent Nobel laureates and public figures, such as Sir Richard Branson and Malala Yousafzai, wrote her an open letter, criticising the crackdown as ethnic cleansing.

We had intended this assembly to be about just the Rohingya, but this week brought another type of persecution, a bit closer to home and more in our attention, which we couldn’t ignore. Donald Trump’s Muslim ban (of course we couldn’t have an assembly without mentioning him…), which we’re certain everyone here will know about, prevents citizens of certain Muslim-majority countries entering the US. These nations are Syria, Iran, Sudan, Libya, Yemen and Iraq, and even if you have a dual nationality, meaning you have, for example, a British and Iraqi passport, the ban would still apply to you. Even American, green card holding Muslims have been turned away from US flights under this ban.

Many people were shocked by how fast the ban came into effect; some people who were on incoming flights to the United States were turned away at immigration. One passenger who was highlighted in the media was a soldier named Hameed Khalid Darweesh. Darweesh had spent over a decade in the US military, working in Iraq, and was given the Iraqi Special Immigrant Visa, which was designed for people who had put themselves at risk by working with Americans. Once he had finally been granted visas for his entire family to enter America, they boarded a plane to New York, but upon his arrival to the country Mr. Darweesh was taken out of the immigration queue at John F. Kennedy Airport, detained overnight, and was told he was not welcome in the US, under the rules of the Muslim ban, even though he had served the US for so long.

Unsurprisingly, the ban will have devastating effects on the United States’ Syrian refugee programme, which, in 2016, accepted 12, 486 Syrians. Although this number is still very low, in relation to the size of the US and the number of refugees accepted by other countries, this ban will almost definitely reduce the number even further.

Many people have been saying that even though Trump’s ban is an attempt to reduce terrorism, it is actually a gift to ISIS. For years ISIS has been trying to convince the world that Muslims are the enemy of the Western World. They hope that Muslims will be alienated, eventually enough that they will turn to ISIS. By blocking travellers from these countries, which are mainly under the rule of ISIS, it gives the idea that Trump is prioritising refugees of other faiths, specifically Christians (as Syrian Christian refugees are specifically allowed in, whereas Syrian Muslims are not). This ban also emphasises a point that ISIS have been trying to get across for years: that Muslims have no place in the West.

Of course, around the world hundreds of thousands of people have gone out to protest this ban, with the slogan ‘No Muslim Ban’, and it’s not only Muslims who have been protesting, hundreds of people were protesting alongside the Muslims in a show of support and unity, against Trump.

One of the people who attended the London protest on 30th January 2017 was Charlotte Winstone, a twenty-two-year-old theatre producer. She said: “I’m going because I can’t believe something like this is happening in my lifetime. People legally allowed to be in the US, people with Green Cards, with visas, are being held against their will, all at the whim of one man’s hatred. We all sat in history lessons hearing about the persecution of Jewish people in Nazi Germany, feeling that if it happened now we would stop it. This is our opportunity to make sure something like that doesn’t happen again.”

Another protester, Jocy Levy, travelled to London all the way from Essex. She said: “This protest struck a chord with me because I’m Jewish and I feel like I wouldn’t be here if it weren’t for immigration and for countries welcoming refugees. So I felt like I couldn’t be somebody who just stood by… Even if it’s doing something small like attending a protest or making a placard.” Her placard said: “Anne Frank could have been an 87-year-old living in Boston today, but she was denied a Visa.”

It could be argued that Trump himself is a victim of media propaganda. It’s undeniable that Muslims are portrayed badly in the media, but in the past few years it has reached new heights. Whenever an act of terrorism is committed, despite the fact that the people committing these crimes are often mentally ill and usually not practicing Muslims, the words ‘Muslim’ and ‘Islam’ are never far behind, which lead people to connect the religion as a whole with ISIS.

But it’s not just the fact that Muslims are portrayed badly, it’s also that when people of other religions do something that would be considered an act of terrorism if a Muslim did it, it’s either completely ignored or attributed to another cause, giving the general public the idea that it is only Muslims who are committing these acts. Here’s a short video. [play up to 0:57]

There have been studies conducted, such as one at Cardiff University exploring the media coverage of Muslims. The results, unsurprisingly, show that the majority of coverage of Islam is negative. The study took nearly 1000 newspaper articles from the past 8 years about Muslims or Islam. Two-thirds of the articles focused on terrorism or cultural differences, and frequently used words included ‘militancy, radicalism and fundamentalist’.

In actual fact, this is completely the wrong picture. Most authorities estimate that ISIS has about one hundred thousand people; this may sound like a lot, but it’s in fact less than 0.001% of the Muslims in the world. On top of this, a tiny number of the people killed in the US are related to Muslims; a few days after the ban was announced, Kim Kardashian tweeted this picture, showing how more people in the US are killed lawnmowers and falling out of bed than by ‘jihadists’. 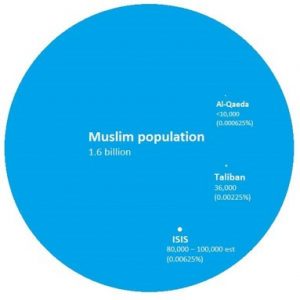 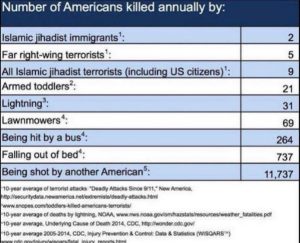 Further, none of the 0.00001% of American Muslims who have ever murdered anyone have ever come from any of the countries in the ban, which raises a few questions: does Trump know enough about terrorism to make these decisions? Does he know that 94% of terrorist attacks in America are carried out by non-Muslims? And finally, does he know that even if there were millions of Muslim terrorists, you still can’t link terrorism to a specific country or religion?

Each generation has choices to make. History tells us that people did not stand up for the Jewish people in Germany, and they paid the price for people’s silence. It is our choice today whether we remain silent, as the world victimises innocent people based on their faith.

Written by Hana Khan and Sana Zuberi in 2017