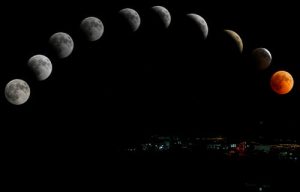 The annual moon-fighting fiasco is a pain we endure every year first with uncertainty when it will be, guessing which day to take off from school and work and inevitably ending with families divided on the day of Eid, when half celebrate on one day and the other half, even within in the very same town, celebrate on a different day.

There are variety of issues which are a point of debate but these are further compounded by stubbornness and rebelliousness within our leaders, mosques and communities.

How can we get beyond the impasse?

The need to combine scientific expertise with the knowledge of Islam

Firstly, we need experts in astronomy to be involved in establishing the correct day, though the astronomers are not qualified to derive Islamic rulings.

Secondly we need the fuqaha (those who derive legal rulings in Islam and pass edicts on contemporary issues which were not mentioned in the Quran) to be involved, though they are not scientific experts. They have the knowledge of the Islamic texts and their contexts which are required to pass rulings and make decisions.

The two need to work together as has happened in the past, when Muslim astronomers advised the Fiqh Academy (al Majma al Faq al Islami) when it is possible to see the moon and establish the beginning and end of the month.

The crux of the moon sighting debate

The question which arises from this hadith is whether the physical sighting of the moon is necessary to establish the beginning and ending of fasting, or whether the hadith is merely saying that fasting should begin and end with the birth of the moon.

In other words, is the ruyya (sighting) part of the ibadah or a means to certainty in knowing that the new moon has appeared?

My view shared by many other scholars is that the sighting is a means to end.

The legitimacy of using calculations

At the time of the Prophet (peace be on him) it was impossible to know the beginning of the month and the end of the month without seeing it in the sky.

It was narrated from Ibn ‘Umar (may Allah be pleased with him) that the Prophet (peace be on him) said:

In this hadith, the Prophet (peace be on him) gave the context for physically sighting the moon because they had no other way of calculating it.

Now we are literate. We use calculations to ascertain the time for salah, we don’t sight the sun everytime we pray. Neither do we disregard calculations and give precedence to viewing the sun with our own eyes. We use science to calculate the exact time for breaking our fast at maghrib. We do not stand outside and watch for the sun to set.

The shariah ruling requires the confirmation of the beginning and the end of the month with certainty. Once you are certain when the beginning of the month is, it is sufficient regardless of the means used to establish this fact.

Astronomy is not astrology, or superstition, it is a science. The scientific data can tell us without doubt when and where the moon is.

The camp for viewing the moon by sight

The alternate view is that it is not enough to know when the new moon has appeared, it has to be physically seen. This is based on the literal interpretation of the hadith that fasting starts when the moon has been sighted. And based on the hadith in which Abu Hurayrah related that the Prophet (peace be on him) said fast 30 days if you cannot see the moon:

Fast when you see it (i.e., the moon) and cease fasting when you see it, and if it is hidden or cloudy, complete the counting of Sha’bān as thirty days. (Bukhari and Muslim)

However, at that time, they had no means of seeing beyond the clouds. Their visibility was restricted by their lack of technology. Therefore as they had no way of ascertaining the moon when it was cloudy they had no choice but to fast 30 days to be sure that it had been born.

The camp that question astronomical data

The camp that is divided over the angle of the moon

We have further debate on the angle of the moon which is required for the moon to be considered ‘born’. Some fuqaha say that 2 degrees is not enough, the moon needs to be 18 hours old which after 6 degrees, for it to be considered a new moon. If it is less than that angle, they reject it.

However this is purely ijtihad (a matter of scholarly debate) as there was no such debate at the time of the Prophet (peace be on him). And we can go with the principle of yaqeen (certainty) that the moon is born regardless of the degrees of its angle.

The argument over local and global sighting

The next issue is that the ummah is divided whether to celebrate with their local mosque, or at the same time that it is celebrated elsewhere.

Whatever reasoning or camp we follow, we have to observe Eid according to when it is being celebrated in our local area. This is based on the fundamental principle that the ummah should be one body.

Sadly, instead of this scenario, we have families divided on Eid day with their local mosques celebrating Eid on different days. And people choosing to celebrate based on day when it is Eid in Saudi Arabia or Pakistan or Zimbabwe…

The importance of unity in the community

Against prophetic advice, we are specialised in breaking the community into pieces. The Prophet (peace be on him) in the above hadith taught us the importance of being united and having community spirit.

He taught us not to be trouble makers in the ummah, at odds with the rest of the ummah. Yet, many of our imams and community leaders are the troublemakers, and allowing  their egos to override the interests of the ummah, creating fractions in the ummah.

Regardless of whether anyone is happy which day it is or not it, Eid is about being together, without having half the population fasting while the others are feasting.

If there was a single authority which declared the day of Eid we would not be bickering over this issue every year, we would have one day for everyone. However we do not have one leader, instead everyone thinks he is a leader. As per the Arab proverb, it is like an onion farm where everyone is a head.

Though there is no single authority or leader, 10 years the main mosques in the UK decided to start Ramadan together. This is community spirit. Anyone who differs is breaking up the ummah. Do not put your authority above communal harmony. Islam is not a corner shop, it is an ummah shop.

There are plenty of ayahs on not being disunited. Obedience is the key for the unity of the ummah rather than self-promotion. This does not mean blindly following but understanding the importance of unity and harmony.

And hold firmly to the rope of Allah all together and do not become divided. And remember the favour of Allah upon you – when you were enemies and He brought your hearts together and you became, by His favour, brothers. And you were on the edge of a pit of the Fire, and He saved you from it. Thus does Allah make clear to you His verses that you may be guided. (3:103)

People need to understand that it is not necessary for them to be convinced whether the declaration of Eid was correct or not, it is up to them to follow the authority or the majority. Rather than going into the details and making up their own minds on the issue.

If we get bogged down in the details, we are missing the bigger picture. We are sacrificing the strength of the community by prioritising our individual reasoning. The devil is in the detail.

Our attitude should be of obedience:

O you who have believed, obey Allah and obey the Messenger and those in authority among you. And if you disagree over anything, refer it to Allah and the Messenger, if you should believe in Allah and the Last Day. That is the best [way] and best in result. (4:59)

However, we are predisposed towards having a rebellious attitude towards authority, which is further embedded in our children by schools in the West as they promote the mentality of individualism, challenging and rebelling against conventional ideas. We were warned against this:

And know that among you is the Messenger of Allah. If he were to obey you in much of the matters you put forward to him, you would face difficulty, but Allah has endeared to you faith (imaan) and has made it pleasing in your hearts and has made hateful to you disbelief, defiance and disobedience. Those are the [rightly] guided. (49:7)

What if the authority makes a mistake

Accompanying the conflict every year, we have accusations that authorities made a mistake and fake news in addition fuelling the confusion and division.

Hypothetically if the authority makes a mistake – it is their problem. It is not an issue for the public, individuals in the public do not have to expiate for the mistake if there was one.

There is a proverb in Arabic that if two people argue whether an animal in the distance is a bird or a goat, and then it flies away, but the party who was wrong still insist its a goat. Even its flying!

It’s time for the ummah to get beyond flying goats, and unite in the greater interests of the community.

How to glue a fractured ummah back together