Lift your spirits by connecting with Allah 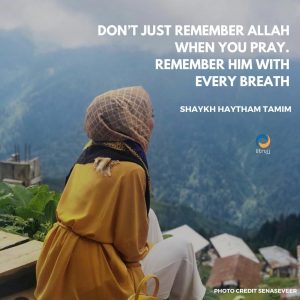 And whoever turns away from My remembrance – indeed, he will have a depressed life, and We will gather him on the Day of Resurrection blind.

He will say, ‘My Lord, why have you raised me blind while I was [once] seeing?’

[Allah] will say, ‘Thus did Our signs come to you, and you forgot them; and thus will you this Day be forgotten.’

And thus do We recompense he who transgressed and did not believe in the signs of his Lord. And the punishment of the Hereafter is more severe and more enduring. (20:124-127)

In Surah TaHa Allah Almighty is warning humanity – those who have received His message, not to ignore it.

The consequences for ignoring it are in this life and akhirah. The least one this life is a confined life- disappointments, anxiety, a heavy chest, misery. This doesn’t mean everyone who has anxiety is ignoring the message but it can be the case sometimes.

You can only ignore what you already have

For those who are ignoring the message, it doesn’t matter how much wealth you have or what you have boarded – it doesn’t give you inner peace in your life.

The messengers and the channel of trusted scholars have passed on the message. Yet some people choose not to respond to it.

Responding is our lifeline

Allah Almighty made it very clear in the Holy Hadith

‘O My servants, you cannot harm Me and you can it benefit me.’

The benefit and the harm is for us. Then why is Allah Almjghty warning us, if our actions do not hurt or help Him? It is out of His mercy that He is guiding us and teaching us that if we ignore the message it will hugely harm us.

As somebody who bought a new gadget and never read the manual thinking he was smart enough to use it, has not read the instructions not to put it in the fridge or in water or in the sun. He can. It is his gadget. But then if it develops a fault die to its misuse, he can blame no one but himself because he thought he had no need for the manual. The one who developed it and made it knows exactly what conditions are needed for the gadget to work properly and which conditions will ruin it.

It could be literally that the ayah means ‘those who do not remember Allah’ – (wa man arada an dhikri) rather than ignore His commands and instructions.

When you feel a heavy chest, it could be because you are not reciting the Quran, or doing dua and tasbih as these bring lightness in the heart.

Either way, ignoring the message or having shortcomings in our relationship with Allah lead to constriction unlike those who whole heartedly embrace the message.

‘For those who want the akhirah, they are working hard towards it, their hard work will be rewarded.’

This is an antidote to laziness. Allah Almighty wants us to be an active ummah. This does not mean shut down your ship and sit in the mosque making dua. But while you are doing your business you can work towards the akhirah by being a trust worthy person and an honest person who is not cheating others, by being honest and kind. This is what you can cash in the bank of the akhirah. It enables you to enter jannah.

O you who believe, remember Allah much and do tasbih to Him in the morning and in the evening

Therefore be involved in the remembrance of Allah Almifhty, not just verbally but practically by applying His message in everything you are planning and saying and doing. Rather than ignoring the message. This makes us closer to Allah Almighty, not distant.

Be considerate of others and of the limits set by Allah Almighty. Throughout the year.

What can I do about those around me who are not practicing or following the right path?

There are two ways:
Gentle, kind reminders are required for ouresleves and others. As Allah Almighty said,
‘You are but a reminder’

These days there are many temptations to pull us away from Him and the straight path.

So we ask Him to make our hearts firm on His religion and make us of those who embrace His message and do not ignore His message. Ameen.