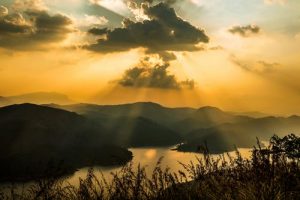 In one of the most seminal hadith, Abu Hurairah narrated:

One day while the Prophet (ﷺ) was sitting in the company of some people, (The angel) Jibril came and asked, ‘What is imaan (faith)?’

Allah’s Messenger (ﷺ) replied, ‘Faith is to believe in Allah, His angels, (the) meeting with Him, His Apostles, and to believe in Resurrection.’

Then he further asked, ‘What is Islam?’

Allah’s Messenger (ﷺ) replied, ‘To worship Allah Alone and none else, to offer prayers perfectly to pay the compulsory charity (Zakat) and to observe fasts during the month of Ramadan.’

Then he further asked, ‘What is Ihsan (perfection)?’

Allah’s Messenger (ﷺ) replied, ‘To worship Allah as if you see Him, and if you cannot achieve this state of devotion then you must consider that He is looking at you.’ (Bukhari)

Are Muslims mumins? Can we tell?

There is a big debate between scholars about the difference between imaan and Islam – is every mumin a Muslim and every Muslim a mumin? Can we see if someone is a Muslim or a Mumin? Islam is about outward actions whereas imaan is about inward actions, which means we cannot judge the inward without the outward. Therefore, if someone believed in Allah Almighty but never uttered the shahada we cannot assume he was a believer in dunya and he not be dealt with in the same manner as a Muslim in terms of shariah. In the akhirah his imaan is between him and Allah Almighty – but in dunya he cannot be buried in a Muslim cemetery if he never uttered the shahada, even if he believed in Allah Almighty because he did not verbalise it. It may well be that he is among the believers in akhirah, but as humans we cannot penetrate other people’s hearts. This is why we need the shahada to be in place as proof of belief. Sometimes people take the shahada in order to get married to a Muslim, or for advantages in business or self-protection rather than true belief. He may well be a hypocrite inside, but we are not in a position to question someone’s motives.

The form of Jibril

The hadith Jibril is so called because Jibril came in the shape of a man. He used to come to the Prophet (peace be on him) as a man. This was the only time that the Prophet (peace be on him) was confused about his identity when he arrived. He only recognised him as he was leaving then he asked the companions if they knew who he was? And informed them that he was Jibril. Later he regularly came as a man, but he only came in his original angelic form a maximum of 5 times. As a man, he took the form of Dihya al Qalbi a companion known for his beauty. But the Prophet would recognise him as Jibril.

The identity of Jibril

Omar (may Allah be pleased with him) mentioned in the narration that he wore very white clothes and had very white hair and that no one knew him. Mysteriously, he had no traces of travel on him. If he was a local, they would have been recognised him, and if he was from outside, he should have been dusty and dishevelled from his journey. But he was perplexingly neither!

The etiquette of Jibril

When Jibril arrived, he came and sat down. This is etiquette of seeking knowledge. Whoever seeks knowledge gains it through humility. The one seeks who knowledge with pride will never learn. There is long tradition of ‘learning on the knees’. No one can compete in knowledge unless he is on his knees. If he wasn’t on his knees, you can’t trust his knowledge. Jibril put his knees up against the knees of the Prophet (peace be on him) which one would only do with someone they are familiar with. Not a stranger or a shaykh whom you don’t know. Yet this unfamiliar behaved in a familiar manner, making the companions more curious and mystified. If you want to seek knowledge, be in the forefront; not shy not in the back. The Prophet (peace be on him) says two people will not be able to learn: the shy one and the arrogant one. The mustahi (one who is shy) stays in the back and does not ask anything. The mutakabir (one who is arrogant) thinks he knows everything and does not ask in case it appears he does not know. If you feel this arrogance, fight it and ask.

The qualities required to gain knowledge

Whomsoever Allah wishes good for Allah gives him a deep understanding of the deen.

Intention is important when we seek knowledge.

In order to learn you need to ask questions, review, memorise and read, and keep coming back to the same issues to understand the more. If not the knowledge evaporates.

Many people attend many courses and acquire multiple certificates but do not apply it, their  knowledge is zero. Knowledge without practice is not knowledge. Knowledge comprises two parts. One is for your own benefit. If you want to benefit you have to be careful. Some people focus on counting the mistakes of their teachers and scholars. This will not benefit the student.

One famous shaykh delivered a lecture for 40 minutes it was well attended. He was very humble and very knowledgeable. When he finished, he was approached by a man who pulled out a long piece of paper and offered it to him. The shaykh assumed it contained a request from the man. But the man said he had been counting the shaykh’s mistakes and had listed them on the paper. The shaykh did not look at that paper but threw it in the bin because the man’s intention was to find fault. Teachers are not infallible, but intention plays an important role. Here Jibril is reaching us how to be humble and ask with the right etiquette and tone.

The significance of how you refer to someone

Scholars commented on the fact he called the Prophet (peace be on him) by his first name. Choosing the right name to refer to people is important. Choose the name people like to be called, not the name they dislike. Ask them how they prefer to be called? Don’t choose what you call them yourself. You cannot imagine how useful it is to memorise someone’s name. If you meet someone after a long while and you still remember their name it touches their heart. Do your best. Some people have a better memory of names than others.

‘Tell me about Islam.’

The root word of Islam is based on three letters. (The majority of the Arabic language is based on the three root letters, up to 6.) Seen lam meen. Salem comes from safety and protection. Aslama means submission. The Muslim is the one who submits to Allah Almighty.

This is why we distinguish between Islam and imaan. Submission is to practice salah, siyyam, etc.

If you say ‘I am a Muslim’ yet you do not pray or fast, then you are not submitting yourself to Allah Almighty. It is just a claim. People say it is not necessary to pray as long has you have a clean heart and don’t harm anyone. One might argue that if your heart is pure but you did not practice your faith, when you die, your heart can go to Jannah and your body can go to hell.

Delivered by Shaykh Haytham Tamim at the Youth Circle on 29th August 2019. Transcribed by A Khan