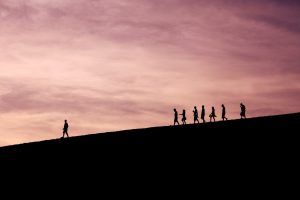 Ibn Umar (may Allah be pleased with him) reported that the Prophet (peace be on him) said:

The most beloved people to Allah are those who are most beneficial to people. (Tabarani)

Anas (may Allah be pleased with him) reported that the Prophet (peace be upon him) said:

‘Indeed Allah will question every leader about his subjects: did he fulfil the amanah or waste it’. (Nasa’i)

There are many hadith which talk about the responsibility of leaders and the qualities of leadership. If you read through the Quran and search for these you find five to ten main characteristics. For example, in the story of Yusuf (peace be on him), he asked for a position of leadership and mentioned two qualities that he had which made him suited to this role, these were that he was knowledgeable and trustworthy:

He said, ‘Put me in charge of the storehouses of the land; I am honest and knowledgeable.’ (12:55)

Leaders must have these two qualities. Furthermore, in the story of Musa (peace be on him) he was employed for being strong and trusted:

One of the two women said, ‘Father, hire him; the best employee for you is the strong and trustworthy.’ (‏ (28:26

Abu Dharr (may Allah be pleased with him) reported:

I said to Messenger of Allah (peace be on him): ‘Why do you not appoint me to an (official) position?’

He (peace be on him) patted me on the shoulder with his hand and said, ‘O Abu Dharr, you are a weak man and it is a trust and it will be a cause of disgrace and remorse on the Day of Resurrection except for the one who takes it up with a full sense of responsibility and fulfils what is entrusted to him (discharges its obligations efficiently).’ (Muslim)

Knowledge should be accompanied by strong and charismatic leadership, and good communication. These are important so that they are effective in dealing with people and delivering the message. Allah Almighty said:

We never sent any messenger except in the language of his people, to make things clear for them. (14:4)

There are many other characteristics that are important, including sincerity (ikhlas) and humility, namely acting for Allah Almighty’s sake, not for personal benefit or gain.

Iyad bin Himar (may Allah be pleased with him) said that the Messenger of Allah (peace be on him) said:

Verily, Allah has revealed to me that you should adopt humility. So that no one may wrong another and no one boasts towards another. (Muslim)

He should be approachable and genuine: feel the pain of the people and know their concerns.

And they say, what sort of messenger is this, who eats food, and walks in the marketplaces? If only an angel was sent down with him, to be alongside him a warner. (25:7)

The disbelievers thought that a leader couldn’t eat with the people and walk in the market, he should have special food and should be isolated from people by his guards, away from public, but Allah Almighty refuted their argument by saying:

We never sent any messengers before you, but they ate food and walked in the marketplaces. (25:20)

It means that the leader is from the people, serves them and looks after them; he loves them and they love him.

The worst situation is when a leader mixes his personal interest with public interest. This is what we have seen especially with regards to Brexit. It is not a question of who is best to lead, but whether my party or your party is in charge. Not who is best at serving the interests of the people. We are familiar with this in our countries back home, but is this happening here as well? Yes, we have the same thing here, just dressed in suits and ties. It is the same scenario – mixing personal gain with public interest.

Successful are the believers….

Those who are faithful to their trusts and pledges. (23:1,8)

Abu Hurairah (may Allah be pleased with him) narrated that the Prophet (peace be on him) said:

Fulfil the trust for the one who entrusted you, and do not cheat the one who cheated you. (Tirmidhi)

Allah’s Messenger (peace be on him) said, ‘Why don’t you stay at your father’s house or your mother’s house to see whether you will be given gifts or not, if you are telling the truth?’

Then Allah’s Messenger (peace be on him) stood up and addressed the people, and after glorifying and praising Allah, he said: ‘Amma Ba’du (then after) I employ some men from among you for some job which Allah has placed in my charge, and then one of you comes to me and says, ‘This (amount) is for you and this is a gift given to me.’ Why doesn’t he stay at the house of his father or the house of his mother and see whether he will be given gifts or not if he was telling the truth by Allah, none of you takes anything of it (i.e., Zakat) for himself unlawfully but he will meet Allah on the Day of Resurrection carrying it on his neck! I do not want to see any of you carrying a grunting camel or a mooing cow or a bleating sheep on meeting Allah.’

Then the Prophet (peace be on him) raised both his hands till I saw the whiteness of his armpits, and said, “(No doubt)! Haven’t I conveyed Allah’s Message! (Bukhari)

We need to work on ourselves and our children for the future to prepare them to be future leaders, to be trustworthy, strong, charismatic, knowledgeable and sincere. Not to mix their personal gain with public interest. We ask Allah to enable us to fulfil the amanah he gave us and to always deliver the truth. Ameen

When to obey leaders and scholars