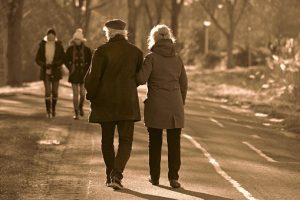 Many women complain about the lack of communication in their marriage. They have limited or zero communication with their spouse and feel isolated in their four walls.

Their husband’s inability to communicate could be a common feature in his family, which he inherited from his parents. It is quite likely, the children of this couple will also inherit this pattern of behaviour.

Sadly having no communication in marriage is a common problem.

Your spouse is your partner and your support to Jannah, so you need to be able to communicate what troubles you, or what pleases you, or what you find interesting and vice versa, so that you can understand and support each other.

The Prophet (peace be on him) and his wives would converse and tell each other stories, often at night after Isha, as is evidenced by the hadith of Umm Zar’, in which they entertain themselves with a story about eleven women who are discussing their spouses.

Spending time with one’s spouse in conversation is even rewarded. Abu Hurairah (may Allah be pleased with him) reported that the Prophet (peace be on him) said:

It is also charity to utter a good word. (Bukhari and Muslim)

Who deserves good words more than our parents, spouses, children and family? Aisha (may Allah be pleased with her) narrated that the Prophet (peace be on him) said:

How can a couple improve communication in their marriage?

When a husband shares what happened in his day, it is important that his wife listens to him a hundred percent without interrupting. And likewise when she wants to share her day, then he should listen attentively as well.

To find out more….

Women are generally more chatty than men and can usually talk for a longer time with more detail, whereas men, when asked how their day was, might just say ‘Alhamdulilah. Fine.’ A wife should learn how to extract more detail from him to help him offload his burdens.

The mentality of men and women is different. While women tend to discuss their issues, the majority of men keep to themselves. When they have a problem they retreat into their cave. They need space. They need to relax before they can emerge again. Then they feel more able to discuss their issues. Otherwise articulating their worries and stresses makes them feel weak.

The Prophet (peace be on him) taught us through a hadith mentioned in Bukhari and others that even if one feeds the other spouse a morsel of food from their own hand it is an act of mercy, which is rewarded; it fosters love between them, increasing their closeness.

Sa’d bin Abi Waqqas narrates that Allah’s Messenger (peace be on him) said:

You will be rewarded for whatever you spend for Allah’s sake even if it were a morsel which you put in your wife’s mouth. (Bukhari)

The man’s side of the story

From a male perspective there may be a variety of reasons why he does not feel able to communicate with his wife:

It is likely that his wife has a problem with communication too.

She might not be creative at pulling her husband out of his cave.

She might have done something that drove him into his cave and shut her out.

In general men find women who are very loud off putting.

She might be very critical or derisive towards him.

Two sides to every story

If one spouse is complaining about their other half, we should remember that there are always two sides in every story. This is illustrated in the story of Dawood (peace be on him), Dawood believed the brother who had 1 goat, without listening to the story from his brother who had 99 goats. When you hear the other side of the story it gives a different perspective. In the Quran, it says:

This brother of mine has ninety nine ewes, and I have one ewe, and he said, ‘Entrust it to me,’ and he pressured me with words. (38:23)

He said, ‘He has done you wrong by asking your ewe in addition to his ewes. Many partners take advantage of one another, except those who believe and do good deeds, but these are so few.’ David realised that We were testing him, so he sought forgiveness from his Lord, and fell down to his knees, and repented. (38:24)

If one person is complaining, don’t believe everything you hear 100%. Explore beyond this.

Only in Jannah are spouses perfect. In the dunya men and women both have plenty of issues.

Problems that crop up later could well have been picked up earlier before a couple tied the proverbial knot. For this reason, we need to do our homework before we get married to ensure we are making the right choice. Don’t go into a marriage blindfolded.

If it happens that you get married to the wrong person, try to see the good in each other and make it work.

Always have an engagement period before marriage. During this time, test your potential spouse and evaluate their main qualities.

Observe if they are generous, miserly or wasteful when they spend their money. It is important to test them. One couple were engaged but the fiancée called it off when the fiancé split the restaurant bill between them.

Making marriages work requires work on our part. We should start by identifying our problems. It is not easy to change bad habits. Realising we have a problem is the beginning of change. Then you can work on it, with the right intention and Allah Almighty’s support and training.

Based on the Marriage Course by Shaykh Haytham Tamim

The Art of Communication

Don’t mistake staying in a bad marriage for sabr. It is weakness.

Saving a marriage when it’s breaking down