How to be patient. 8 ways to improve your sabr 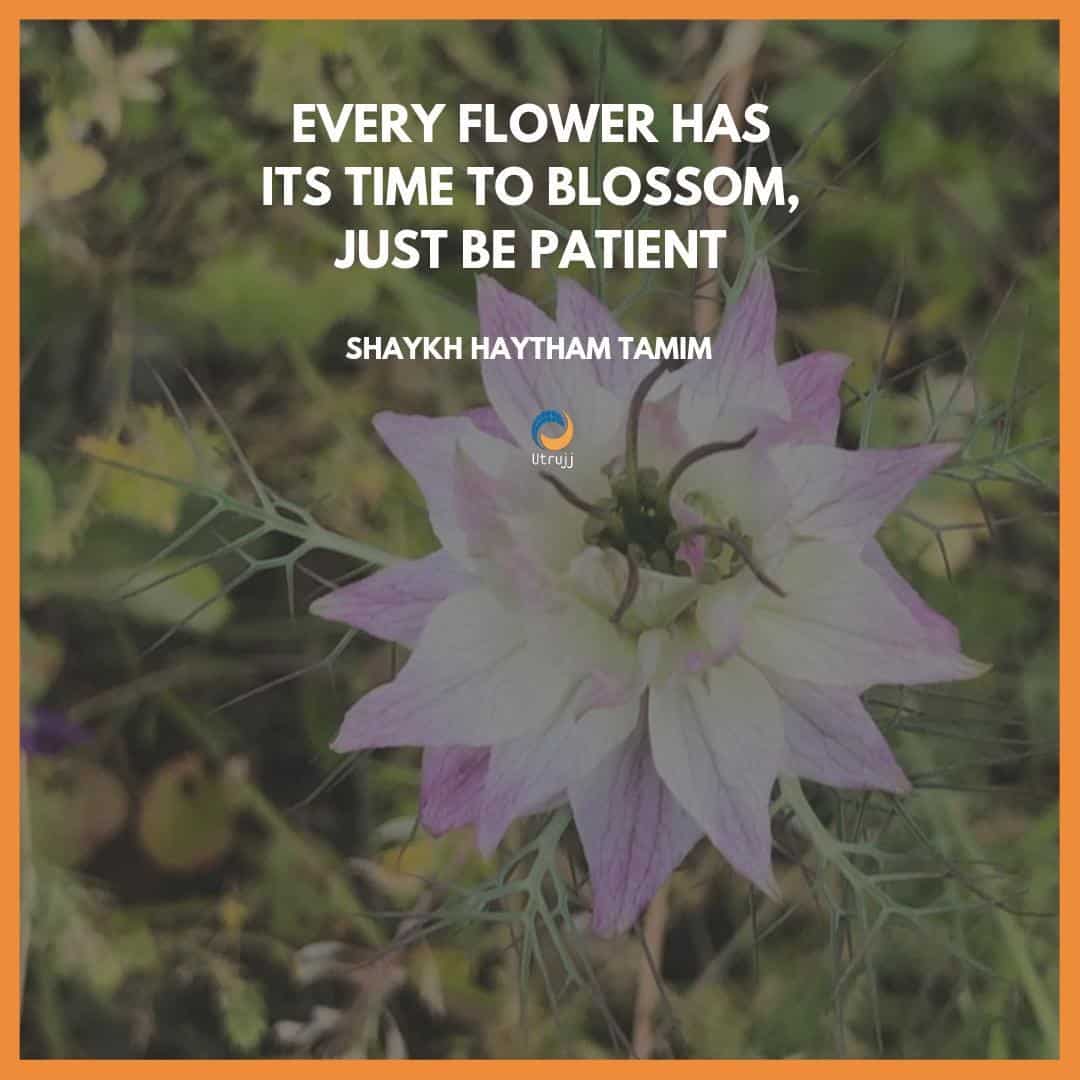 Many people think that sabr is a passive state. Of waiting patiently.

Sabr is more than this. Sabr is an active state. Sabr is a quality that grows with practice.

To get out of bed and pray fajr requires sabr – you have to fight your pillow and mattress and duvet in order to get up and pray. You also need sabr to refrain from what is haram. This is why Allah has given a special status to the sabiroon and those who are practising patience are promised unlimited reward.

Those who patiently persevere will truly receive a reward without measure (39:10)

Having sabr entails fulfilling our obligations, refraining from the haram and doubtful, and being able to wait for what we want. Whatever our capacity of patience is, we can learn to become more patient. This requires training. Here are 8 ways to improve sabr:

8 ways to improve your sabr

You can read about people with sabr. Learn through the example of companions who showed sabr. You can also read about sabr from the scholars who wrote about it, such as  Ibn Qayyim al Jawziyya wrote a book Iddat as-Sabirin wa Dhakhiratu ash-Shakirin on how to practice patience. He mentioned that Sabr consists of three elements:

Start with self-analysis and pinpointing where you lack sabr. Then, set weekly or monthly targets to improve your sabr. It might be you are hasty or impatient when making decisions. Or you lack sabr in your emotions. Accordingly set small targets and work on it step by step.

One way of achieving this, as most things in life, is by imitation. You can learn sabr by being in the company of those who have sabr. Then you see it being practiced, rather than its theory.

An example of this is when as students we used to visit our Shaykh Younus Shurbaji. He is a lovely joyful shaykh. One of those whom you feel overjoyed when you visit him, as if you’re on cloud nine. (There are jalali (majestic) shuyukh and jamali (beautiful) shuyukh. The jalali shuyukh are intimidating. You can’t look at them. However, Shaykh Younus was jamali 99% of the time. And jalali the rest. He was highly in demand, with people queuing to meet him all the time, so it was almost impossible to see him. And his family were constantly turning people away. My fellow students and I tried to see him a few times without success. But one day, when it was snowing heavily in Damascus, we decided to visit him, as no one else would be crazy enough to visit him in that weather. After a 30-40 minute trek through the snow, we knocked on his door and he opened it. Astonished to see us, he said, ‘What on earth are you doing here now, in this very weather?’ Then he cast his gaze up to the sky, and said, ‘You sent them to me to test me,’ and ushered us in. He realised immediately that we were a test of his patience. And it was such gestures that taught me sabr. Had I not seen this, I wouldn’t know how to learn sabr.

Being in a position with constant exposure to people teaches you sabr. People in the front office, rather than the back office have to learn sabr. Responding with kindness and courtesy to people with their varied personalities and moods is an opportunity for husn al khidmah – good service. And you are rewarded for this.  Be genuine. Deep down appreciate that Allah Almighty has sent this to you to learn sabr.

When people criticise you, you need sabr. When you feel sad because of people’s criticism though you did your best requires deep tawakkul. This does not mean rejecting constructive criticism, as that is part of pleasing Allah Almighty and improving your character. It means not changing your intention to please Allah Almighty in the face of praise or criticism.

5. Ramadan – the Academy of Sabr

During Ramadan we are trained to attain a level of sabr we do not achieve at other times of the year. By refraining from the halal during daylight hours, we prove to ourselves that we have the power within us to refrain from anything as long as we commit to it.

Sabr is boosted by dhikr. If we remember Allah Almighty, when difficulties arise we gain consolation that Allah Almighty is our Protector and the One we trust.

Nothing can harm us unless He wills it. And He has promised that every difficulty comes with ease, which increases our patience as we know that the good is around the corner. As long as we are mindful of Him, He is with us:

Does this mean Allah Almighty is not with those who don’t remember Him?

In fact, He is there, but they are not with Him. They block Him out of their life. Thus, if our remembrance is low, we choose Shaytaan’s company over Allah Almighty’s. Sabr and dhikr are active states. Like an app we need to put ourselves in dhikr and sabr modes.

Sabr is about being in control of our emotions, saying and doing the right thing, rather than being controlled by our emotions. Sabr is not the passive endurance of hardship and oppression, but taking our complaints and needs to Allah Almighty and asking Him to help us and keep us steadfast, whilst seeking the means to improve our situation.

When we lose patience, we hand over control of ourselves to Shaytaan. We become a remote control in his hands. We can lack self-control, losing our patience easily and being angry with everything – fighting flies. We can say things which we regret, and which are as impossible to un-say as trying to put a bull with horns back in a small hole.

8. Refuse to be oppressed or defeated

There have been many prophets with whom many men of Allah have fought; they did not lose heart for what they suffered in the way of Allah, nor did they become weak, nor did they yield. Allah loves the steadfast. (3:146)

The colonisation of the Muslim world has led to the psychological defeat of many Muslims. We have lost our heritage and identity. Ibn Khaldun said that when you lose a war, you feel diminished beneath the superiority of the winner. And as a result, we have, like our colonisers, separated religion from our lives. We look to the West for solutions, rather than to ourselves.

Physical harm can be overcome, internal defeat leads to loss. in the ayah above from Surah Al Imran, Allah Almighty addresses the psychology of the loser here. He points out that no one’s loss is unique. He is inspiring us that if we suffered loss we are in good company – in fact the best company, as prophets and their followers suffered loss too, and our loss is not greater than theirs.

Through this window to the unseen, we can see the prophets who were themselves engaged in battles and challenged by the enemies of the truth. We too have to take up this mantle, and carry on. Allah is giving us guidance, direction and vision. He has already shown us that a small group of obedient people can win epic battles, such as the small but mighty army of Talut, which comprised ‘lordly’ people – the ribiyoon, who were pious, sincere committed, obedient, and strong. These are the qualities that secure victory. All people, no matter how good, will face obstacles challenges and difficulties, but we must not give up at the first defeat. Don’t be weak.

Sabr is not the same as suffering

It is worth pointing out that sabr and suffering often get confused in people’s minds. Sabr does not mean suffering. In the past, many women in particular remained in distressing, perhaps even abusive marriages under the impression that they had to have sabr. They blurred the concepts and tolerated harm under the mistaken idea that they were having sabr or that this was their qadar. They should have walked out of the marriage or situation a long time ago, but due to their naivety and misunderstanding they prolonged not only their own personal suffering but also that of those around them who love them, who are also devastated by the fall out. This mentality is wrong and is actually weakness.

Allah Almighty has assured us that He loves those who endure and who are patient. May Allah Almighty make us of the sabiroon and give us the right understanding of His book and the Sunnah of His Prophet (peace be upon him). Ameen.

Taming the Nafs  – on Self control

Don’t stay in a bad marriage thinking it is sabr. It is weakness.

How to shield yourself from family conflicts

The foolproof way to achieve failure