How excellence comes by getting the basics right

Attaining excellence with the right foundation 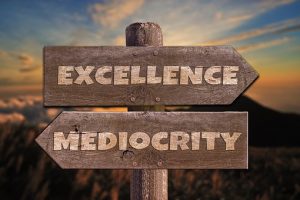 From the hadith Jibreel found in the collection of Imam Bukhari, we can ascertain the basics of our religion. The religion of Islam in a simplistic view can be separated into three categories.

Firstly, Imaan – the belief in Allah, His Angels, His divine books, His Prophet’s (peace be on him), belief in destiny and the belief in the Hereafter. Imaan is the theological aspect of the religion.

Secondly, Islam – The testimony in the belief of Allah, the Salah, Fasting in Ramadan, Zakat and Hajj. Islam is the practical aspect of the religion. Amongst the most important effects of these acts of worship and the profound wisdom behind them, is that they create a direct bond between the worshipper and his Lord, strengthening and rejuvenating the faith that exists in the heart of the believer.

Allah’s Messenger relates to us that Allah says:

And finally, Ihsan – to worship Allah as if one was in His presence, it means that one should seek perfection in all his actions. Allah loves perfection and He is watchful of everything we do.

In another hadith as recorded by Imam Bukhari, it lays down the fundamental aspects of outward submission to Allah. The Messenger of Allah (peace be on him) has said:

‘Islam has been built on five pillars …’

In this hadith the submission to Allah is based on some foundations, in a way similar to a structure. The parable that the Prophet (peace be on him) has given is a picture of Islam like that of a house. Where the foundation pillars are five, built around a central pillar of Shahadah; the declaration of faith. Just like the ‘Declaration of Independence’ gave birth to modern America, the declaration of faith gives birth to a believer. If a person fulfils these aspects, he has laid down a solid foundation for his religion as a whole.

The foundation alone by itself cannot be called a house. To make a house we need walls, rooms, kitchen, furniture and decoration. The other acts of Islam are like the complementary parts or finishing touches that add to the completeness and beautification of the house.

Using the analogy of the house, we have the foundation, and that is the five pillars, the walls are the constant remembrance of Allah, which keeps us fortified and gives us shelter from the Shay’tan. The kitchen is the spiritual nourishment that comes from the sincerity with ourselves and Allah, the decoration is the beautification of our character, and the main chandelier of the house is the light of Allah, the light being His guidance (Qur’an and the teaching of the Prophet (peace be on him)). We all need to build a house like the one mentioned and make it our home, and all the time, attempting to make the foundation stronger, the house ever more brighter from seeking knowledge and gaining closeness to Allah, and the interior more decorative by always improving our character.

Referring to the house analogy again, a house which is multi-storied has many levels; you have the foundation, followed by the 1st floor, then the 2nd floor, then levels higher than those before, and so on. Likewise, you have levels in Muslims. First the common Muslims, then the practicing Muslims,  then the scholars,  then the muftis, then grand muftis, then mujthahids, then saints (aw’liya – the people who have attained nearness to Allah), then the Companions, then Prophet (peace be on him)s, then the Messengers, then the great Messengers and finally the Prophet (peace be on him) (saw), all raised in ranks.

A person living on the second floor and another on the twenty second floor do not have the same view of the world even though they share the same residence. The difference in levels is due to knowledge, and this verse is stating the importance of knowledge. We should all aspire to climb these levels; we have to seek knowledge with the intention of pleasing Allah and not for being raised.

We can also look at the levels from a spiritual point of view. From the hadith Jibreel we referred to earlier, the last category of this religion is Ihsan.

The general meaning of Ihsan implies doing well, doing goodness, behaving with others in a good manner. It also implies perfecting something or doing something in the best way. A person will behave towards others in the best possible way if he is truly doing it to please Allah. Hence he excels both in his relation towards Allah in his rites of worship as well as in his relationship to Allah’s creatures as he has knowledge that Allah is watching him.

He uses everything in his possession, his wealth, his knowledge, his time, and his position to do good to others. He spreads his knowledge and never misses an opportunity to guide others, and that is Ihsan with respect to knowledge. He uses his rightful position and influence to help those who are deserving and in need of help.

In essence, the main motivating factor behind Ihsan is goodness and excellence.

‘Worship Allah as if you are seeing Him. But if you cannot achieve that level, worship Allah knowing that He sees you’.