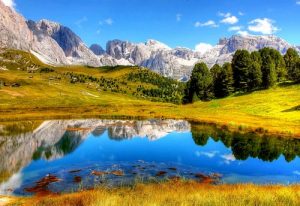 The word qurb meaning bringing near appears in multiples forms 96 times in the Quran, including muqarrabūn (مُقَرَّبُون) and qareeb, someone who is close physically close or related.

Qurbah has been used twice in the Qur’an in (قُرْبَةٌ) singular form and (قُرُبَاتٍ) plural form in the same verse.

How do you draw closer to Allah Almighty

If we examine ourselves, we can tell how much we love Allah Almighty by assessing how much effort we put in doing the acts that bring us closer to Allah Almighty. Imam al-Muhasibi broke the acts down according to four types of motivation.

1. Motivated by the glory of God

The most honourable and best are those who do things because of the glory of Allah Almighty.

To perform deeds to glorify Allah Almighty is called ta’dheem. The motivation comes from hearts that are filled with awe for the majesty of Allah Almighty, and their actions are a reflection of this and an expression of the glory of Allah such people feel in their hearts.

Their deeds were good and their actions were kareem (noble and generous). As much as they honoured and glorified Allah Almighty in their hearts, their action would be (a reflection) in proportion to their glorification.

Such people do not simply pray 2 rak’at in 2 minutes but their actions are generous, like Aisha (may Allah be pleased with her) mentioned about the Messenger of Allah Almighty’s (ﷺ) prayer:

He performed four rak’at at a time, but they were prolonged and beautified, as he was experiencing the sweetness and the delight of presence within his prayer. It was something beyond ritual and monotonous action – it was an expression of love, faith and closeness to Allah Almighty.

Just as in salah it is not the quantity but the quality which counts, in charity, again what counts is the internal state of the donor. Whether the donation is £5 or £5000, donating with the intention of honouring Allah Almighty glorifies the donation. It is how one deals with Allah Almighty. The Prophet (peace be on him) comparing two donations said:

‘A Dirham was better than a hundred thousand Dirhams.’

The companions said: ‘O Messenger of Allah Almighty (ﷺ), how?’

Another example is that of a Shaykh who was raising some funds for a masjid. He was going from shop to shop asking the business owners to support the cause for Allah Almighty’s sake. There was a wealthy man who never went to the masjid, or prayed or practiced his deen. In fact he was actually critical of ‘practicing Muslims’. The Shaykh wanted to go and ask this business owner to support the masjid, even though he had been advised not to approach him for his animosity towards practicing Muslims, let alone a Shaykh.

The Shaykh approached businessman, saying, ‘We are collecting some funds for the masjid, please support us.’

The man said, ‘You are crooks. I will not support you’. He insulted and embarrassed the Shaykh who left. The people said, ‘We told you so… he wasn’t going to help’.

The Shaykh undeterred returned to ask again, thinking he must have had a bad experience in the past’.  The man was annoyed again and refused to give a single penny. The Shaykh insisted, ‘Give me something for Allah Almighty’s sake’. The man said, ‘Since you insisted, there you go’, and spat in the hands of the Shaykh.

The businessman experienced a moment of realisation. He became remorseful and began to cry. He then donated a huge amount. This was the due to the ta’dheem, glorification and honour of Allah Almighty the Shaykh had in his heart. His reaction spoke beyond his words. It was full of awe and wisdom.

Anyone else in that position would probably have hit the businessman, or called him ‘a kafir’ for spitting on Allah Almighty. But the Shaykh’s wisdom and state led the man to transform. The man became a regular musalli who donated generously to the masjid. One little action with wisdom changed the outcome completely.

The story of a highway man

Bishr Al- Hafi (d.227 H) was a highwayman. One day he found a piece of paper on the ground, which had the Name of Allah Almighty. Bishr was saddened that the Name of Allah Almighty should be on the ground, so he wiped it clean, perfumed it and raised it high in his house. He saw a dream and a voice called out to him. ‘Bishr, you have elevated our Name, and henceforth we shall elevate your name.’ This was the beginning of his transformation from a highway brigand to a wali (someone close to Allah Almighty).

No good deed is ever small if it arise from a heart full of the glorification of Allah Almighty.

There is nothing beloved to them and sweeter in their hearts than doing something that will make them closer to Allah Almighty.

It’s not any particular thing (ibadah, prayer, fasting, charity, service, helping others), rather it is anything which is done as a means of drawing closer to Allah Almighty.

Imam Al-Muhasibi mentioned about the second group of people:

Some people do things because they want to be close to Allah Almighty.

Their fear is that by not refraining from a prohibition, they will not be amongst His awliyya’,(those whom He loves the most). Their underlying concern is achieving closeness to Allah Almighty.

Their motivation is different from the first category who are motivated by expressing the glory of Allah Almighty. Here in the second category, they are keen in drawing closer to Allah Almighty by doing the obligation and refraining from the prohibition.

3. Motivated by the fear of Allah Almighty and His punishment

Imam Al-Muhasibi mentioned about the third group of people:

Al-Hasan Al-Basri (d.110 H) was given a drink of cool water in a very hot day. He took the glass whereupon it fell from his hands and he fell unconscious. When he regained consciousness, he was asked: ‘What is the matter O Abu Saeed?’ He said: ‘I remembered the desire of the inmates of Hell when they say to the people of Paradise: ‘Give us some of the water from some of the provision that Allah Almighty has granted you’ (Al-Araf: 7:50)

A man said to his brother: ‘O brother have you been informed that you will pass over the Sirat (bridge over Hellfire)?’ The man affirmed positively. Then his brother said: ‘Have you ever been told that you will go over it safely?’ ‘No,’ answered his brother. Then the man said: ‘Why do you laugh then?’ Al-Hasan added that his brother was never seen laughing again.

Such people live in the world as though they have one foot in this world and the other in the Hereafter. Their thoughts and actions are motivated and connected to the life beyond this world.

Some people’s disposition is like this, for example Ibn Al-Jawzi (d.597 H). Many of his books had topics like ‘The Disturber of the Hearts’.

We also saw this quality in Abu Bakr al-Siddeeq (may Allah be pleased with him) who said:

If one of my feet were inside Paradise and the other outside it, I would not feel safe from the punishment of Allah Almighty.

In other words, he would only feel safe and rest until both his feet were in Jannah. Fear can therefore inform the intention, increase sincerity, eliminate showing off, and control arrogance etc. The presence of fear eliminates desires for dunya.

Because of the fear in their heart, they have no more desire anymore.

Lust is not expelled from the heart except through an overwhelming fear of Allah or a deep longing for Him.

They do things because of Hayaa’: they are shy before Allah Almighty.

They are training themselves both outwardly and inwardly to be mindful of Allah Almighty, which is at the core of ihsan. It is knowing that Allah Almighty is watching us and so we ought to be on our best behaviour.

Uthmaan ibn Affan (may Allah be pleased with him) was known for his shyness before Allah Almighty.

Imam Al-Muhasibi said that out of these four levels of motivation (whether it is for the glory of Allah Almighty, wanting to be close to Him, out of fear of Him, or shyness), we are not included in any of these. May Allah Almighty forgive us.

And I think Imam Al-Muhasibi is speaking on our behalf as well.

May Allah Almighty forgive us and enable us to taste and live the realities of these levels.

Duas Allah is quick to answer

Filling your heart with none other than Allah

How can you increase yaqeen

How to spread love

5 ways to improve your spiritual state

Fear in Islam: Allah’s Favours Being Denied or Granted – Utrujj

Fear in Islam: The Soundness of the Intention – Utrujj

Fear in Islam: Deeds Alone are Not Sufficient to Earn … – Utrujj

The Right Way and the Wrong Way to Fear Allah – Utrujj