Fathers – the shortcut to jannah 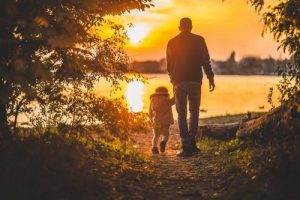 Being good to your parents

Being kind to your parents wa bil walidayni ihsana has been repeated many times in the Quran. Allah Almighty mentioned five verses about parents, including these in which being good to parents is the very next command after worshiping Allah Himself- the two commands are said within the same breath:

We made a covenant with the Children of Israel: ‘Worship none but God; and be good to parents (2:83)

Worship God, and ascribe no partners to Him, and be good to the parents, (4:36)

Your Lord has commanded that you worship none but Him, and that you be good to your parents. If either of them or both of them reach old age with you, do not say to them a word of disrespect, nor scold them, but say to them kind words. (17:23)

The gap between theory and practice

We see this command coming through the Quran, and being implemented in the sunnah of the Prophet (peace be on him).

However while we are very familiar with these commands, our practice generally falls short.

With the pressures of time and distance, combined with personality clashes and generational gaps the relationship between fathers and children can become weak, strained or full of friction.

In the pursuit of earning a livelihood, the pressures of life and work and ironically in the energy and effort it takes to set up their own families and bring up their own children, the very bond which was the foundation for the son to grow up and become a man, can crumble when the son has embarked on his own independent life.

Do not upset your father

Though Islam keeps reminding us that parents are important and though we are aware of the high status of the mother, we tend not to be aware about the narrations concerning fathers.

The father is a gateway to Jannah

This oft-neglected relationship when nurtured becomes our entry to jannah. As we see from the Hadith we cannot underestimate the value of the father, or even bringing a smile to his face:

Abu Darda’ reported that the Prophet (peace be upon him) said:

The father is the middle of the gates of Paradise, so keep to this gate or lose it. (Tirmidhi) 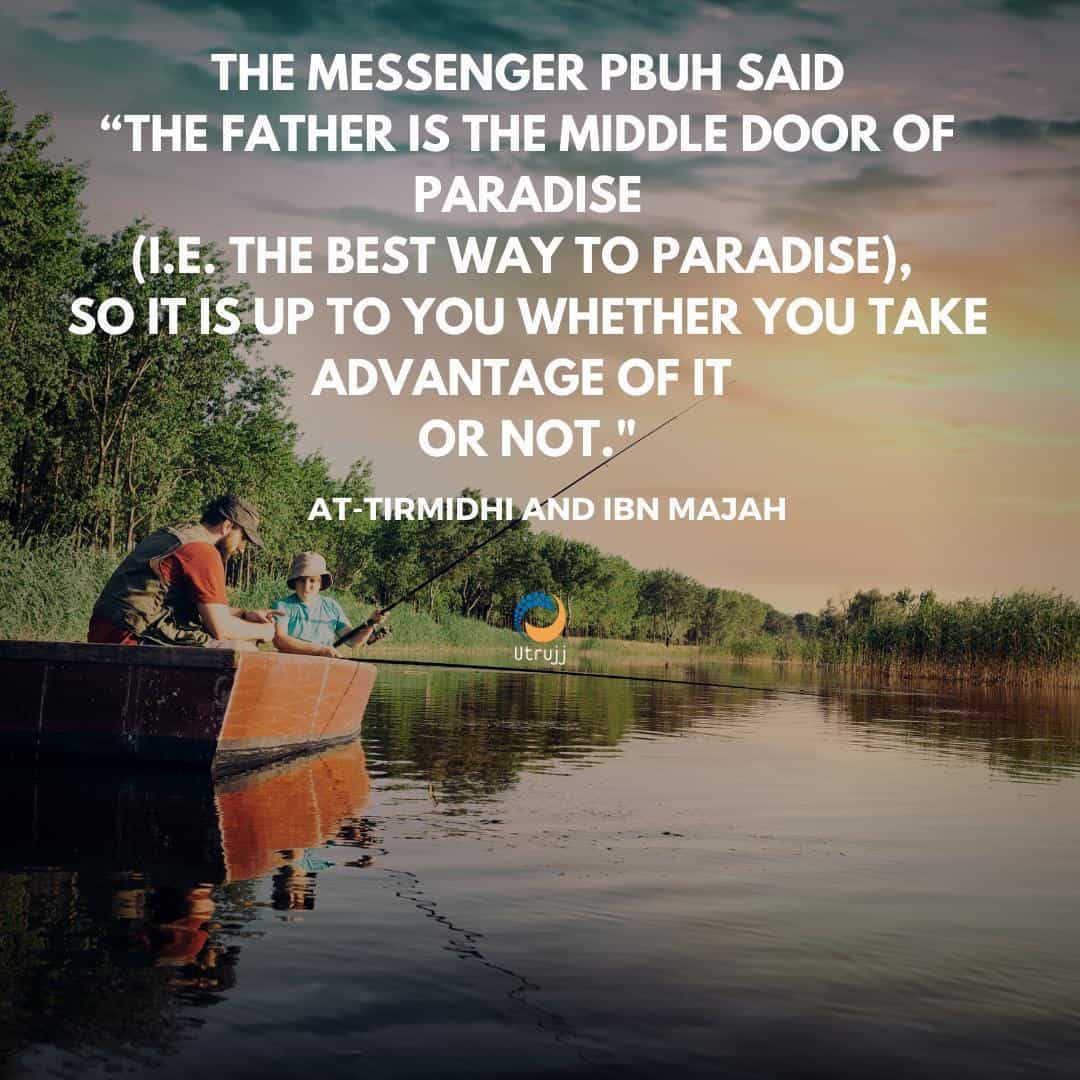 What is the significance of being the middle gate?

Commentators have mentioned that Jannah has 8 gates and the distance between two shutters of the gate of Jannah is 791 miles, as in Sahih Muslim.

So the gates all together are wider than the whole earth.

Hence in another narration, Abu Darda’ (may Allah be pleased with him) reported:

I had heard Messenger of Allah (peace be on him) saying, ‘A parent is the best of the gates of Jannah’; so if you wish, keep to the gate, or lose it.’ (Tirmidhi and Ibn Majah)

The father is the shortcut to jannah

If the father is the best gate to Jannah, the short cut to Jannah is being obedient to your father. And the happiness of the father.

Is your wealth your father’s wealth?

Indeed the rights of the father extend to his right to the wealth of his son. Many of us have heard this hadith many times reported by Amr bin Shu’aib:

When we look at this narration in conjunction with the other narrations on this incident we discover that the Prophet (peace be on him) asked the man to bring his father and questioned him on why he was taking his son’s wealth. The father said that he was not taking it to waste it, but to spend it on his paternal or maternal aunts or on himself. He was in need.

Some fathers take the hadith out of context and quote it to say that their sons should hand over their earnings. The Prophet (peace be on him) said that fathers should not take their sons’ money, unless they are in need. When the father is in need, it is compulsory for the son to help him. But the father cannot misuse the authority which he has been given by Allah Almighty to blackmail his children. Authority comes with conditions and responsibilities.

The debt owed to the father

Reflecting the silent sacrifices a father makes throughout his life to ensure the best for his children, (often unnoticed in comparison to the mother’s sacrifices which are more obvious) Abu Hurairah (may Allah be pleased with him) narrated that the Messenger of Allah said:

A son cannot ever repay his father what he owes him, unless he finds him in slavery, then buys him and emancipates him. (Muslim)

Serving your parents is equated with jihad

Serve your parents throughout their life

We have to be kind to our parents regardless of their age. We are not supposed to wait til they are old to serve them. We should obey them unless they command us to do something which is not in line with shariah. We have to fulfil their demands unless their requests are haram.

What a child should do for a deceased father

A man from Ansar came to the Prophet (peace be upon him) and asked what he could do for his father after he had passed away, and he was directed towards four actions:

O messenger of Allah is there’s anything I can do of birr to my parents after they passed away? He said peace be upon him: yes, four things: to pray for them, do istighfar for them, fulfil their vows, and be generous to their friends and relatives from their side. (Musnad Ahmad)

When the Prophet (peace be on him) visited the grave of his mother near Madinah he cried until everyone was crying. It was a reflection of his softness and the pure instinct in him to love his mother.

We have advised the human being to be good to his parents. But if they urge you to associate with Me something you have no knowledge of, do not obey them. To Me is your return; and I will inform you of what you used to do. (29:8)

The cycle of goodness

This act of kindness comes back to you. The kind person to their parents is treated by kindness from his own children. If you are vicious to your parents your children will be vicious towards you.

There is a real story of a man whose father was a widower and a very old, so his son brought him home to look after him, but his wife did not want him. Instead of saying, ‘My Lord, have mercy on them, as they raised me when I was a child.’ (17:24) as the Quran commanded, he carried his father on his back to the cemetery to abandon him. When he arrived his father told him to move a few steps further and put him down in the corner. When his son asked why, he replied that it was the same spot he had abandoned his own father. Such behaviour is against the shariah. To be unkind to our parents is not acceptable, it’s one of the major sins (kabira).

Instead be generous and gentle to your parents. Abu Huraira reported that a person came to Allah’s Messenger (peace be on him) and said:

This reverence and respect towards the mother is emphasised because women were treated badly by society and were weak and easily oppressed.  This is why it was highlighted to look after the mother but we cannot neglect the father either. This is important advice, if we want a shortcut to Jannah we need to be kind to our fathers.

Fathers have a special role to play. They have earned their status by providing for their families. Not just financially – but it is the fathers responsibility to look after their children as they have been appointed their guardians.

All of you is guardian and responsible for those under his care. The father is a guardian. (Bukhari)

The father has the responsibility to be the one who guides, as well as plays with his children. Who is their role model and friend. Not just the one who is emulated by his sons but the first male contact and bond a girl forms in her life.

Studies show that the playfulness of the father has an important role in child development and well being, which children brought up by single mothers miss out on.

Thus the father’s privilege and status does not come without responsibility. He has to provide a good tarbiya (education) and have good character and deen. He should have realistic expectations of his children and at the same time take interest in their spiritual and social development not just their academic.

Children absorb so much from their parents- inheriting not just their DNA but their psychology, behaviour, habits, and relationships which makes it important for fathers to have good relationships with their wives.

Above all, while the father has to invest time in and give attention to his wife and children- it should never be at the expense of his own relationship with his father and his mother, if they are alive.

It is a delicate balancing act and huge responsibility and this is why it comes with such a huge reward.

We see in the example of the prophets (peace be on them) gentleness and wisdom in the way they raise their children. We see how Ibrahim (peace be on him) bridged the generation gap with his son, we see Yaqoub’s deep bond with Yusuf, and his protectiveness towards him and Prophet Muhammad (peace be on him) showing respect for his daughter Fatima and his playfulness with his grandsons. Fatherhood is not about cut and dried obedience, but obedience out of love,  honour and respect.

Reconcile with your fathers

If you have any issues with your father, reconcile these issues today. Not tomorrow. You never know when you might die. Seek their pleasure; their pleasure is the same as Allah’s pleasure. Remember that this is a command from Allah Almighty and His Messenger (peace be on him).

We must rekindle this bond. In the famous Hadith of Jibril when he came to the prophet in a shape of a man he said:

‘Inform me about some of the signs of the day of judgement.’

He said, “A slave girl will give birth to her own master’ (Muslim)

Some scholars said this means that one of the signs of the day of judgement is that parents will be treated like slaves by their children.

We ask Allah to enable us to be kind to our parents in their life. Ameen

Khutbah delivered at the Muslim World League on 24th January 2020

Transcribed by A Khan 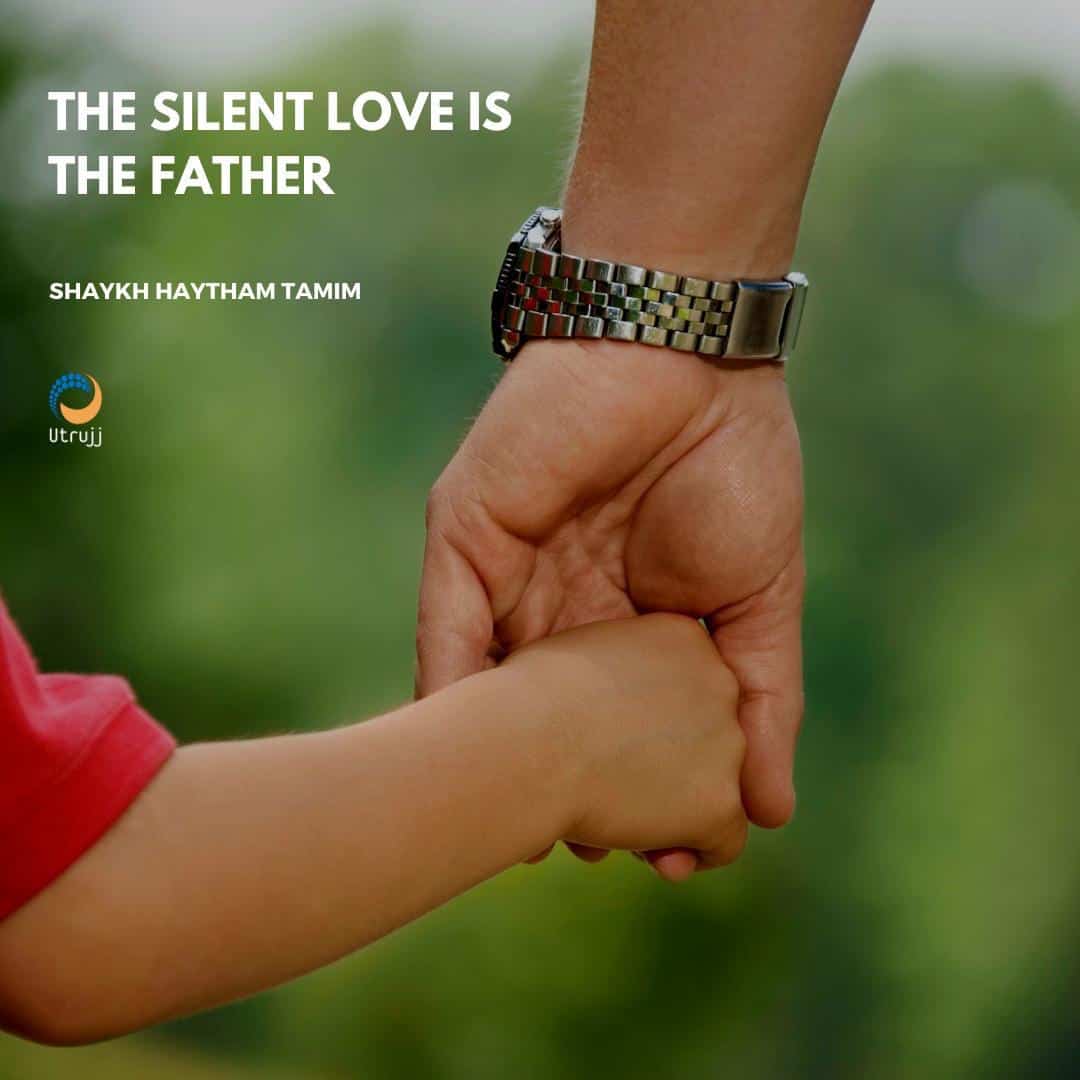