Fallen out with someone? Time to let it go

Freeing the space in your heart

When the gates of forgiveness are open

When Forgiveness is postponed

In Ramadan we are longing for forgiveness. Yet while it is the month of forgiveness, and particularly Mondays and Thursdays, forgiveness is postponed according to this hadith when there is any rancour or conflict between you and your brother. Unresolved issues, grudges and bitterness.

The core of this hadith is that Allah Almighty forgives us when we are able to forgive ourselves. It highlights the importance of the purity of the heart, so that it can receive the forgiveness.

How is forgiveness postponed?

Does this hadith mean that if you have grudges, all sins are not forgiven, or that all sins are forgiven except this inability to reconcile differences and make peace with your brother?

The difference could be between you and your sibling, but equally it could be your father or colleague, friend, or neighbour etc. If you have any disputes with any of your brothers in humanity, your entry to Jannah is blocked until you have sorted out your unfinished business.

There is something wrong when two people cannot make peace. It goes against the general guidance of the Quran and the Sunnah, as Allah Almighty says in surah Hujarat:

The believers are but brothers, so make reconciliation between your brothers and fear Allah that you may receive mercy. (49:10)

If you have a conflict with anyone, quite often it is over something petty. Once the ego has got involved, the issue becomes inflated. The more you leave it the more it grows and festers.

The hadith is encouraging us to sort out our conflicts because while are longing for Allah Almighty’s forgiveness, we do not know when our departure date is. It might be today. No one knows.

Resolve your disputes. Have less conflicts and less sins on your record. Do not hate one another. Do not envy one another do not disconnect one another. Allah Almighty wants harmonious community based on mercy and love:

All of the children of Adam are sinners, and the best sinners are those who repent. (Tirmidhi)

We also make mistakes and hurt others – deliberately or inadvertently. But if you are not willing to forgive those who wrong you then why should you be forgiven by them?

As per the hadith Qudsi, Allah Almighty says:

My mercy prevails my anger. (Bukhari)

Those who are merciful will be shown mercy by the Most Merciful. Be merciful to those on the earth and the One in the heavens will have mercy upon you. (Tirmidhi)

Allah shows mercy to those who are merciful with one another. (Bukhari, Muslim)

We show mercy when we forgive, but when we withhold our forgiveness Allah withholds forgiveness from us.

Dwelling on and inflating the hurt in your heart

We need to learn how to empty our hearts of rancour and fill our hearts with mercy and love. The heart which is full of hatred because it was wronged, keeps rewinding bad memories. When it sleeps it is haunted by these memories. It can be any number of people who cause you upset. We need to stop rewinding bad memories. It is unhealthy and can push you into depression. Press delete, and go into the recycle bin and delete it from there as well.

The fruits of letting go

When two people reconcile, mercy envelops both of them. In the famous hadith when the Messenger of Allah (peace be on him) was sitting with a group of the companions (may Allah be pleased with them) in the masjid and he said: ‘A man will now enter [who is] from the people of Paradise.’ And a companion walked in. Later it happened again, and then a third time. ‘Abdullah ibn ‘Amr ibn al-‘aas (may Allah be pleased with him) wanted to find out what was so special about this man, so he asked the man if he could stay over his house for three days. (He made up an excuse). The man allowed him to stay. ‘Abdullah noticed that the man didn’t do anything out of the ordinary: He didn’t fast all the time, he slept some of the night and prayed some of the night, and so on. So after the three days, ‘Abdullah told him the real reason why he requested to stay with him, and he asked him what it was that could be the reason why he was from the people of Jannah.

The man couldn’t think of anything, but after a while he said :

‘Every night, before I go to sleep, I forgive whoever has wronged me. I remove any bad feelings towards anyone from my heart.’ (Musnad Ahmad and Musannaf Abdul Razzaq).

When you have wronged someone, ask them sincerely for their forgiveness. Not on the spot as that time is charged with emotion. But afterwards, go and ask sincerely. Ask one, twice, or three times if need be. Even they reply no, they will stop not even forgive you at the gates of Jannah, you will be forgiven.

If you ask your brother for forgiveness more than three times you will be forgiven and he will carry the sin.

All of us wrong many people. So call them up, them send a gift as a gesture of goodwill and sign of your regret. Tell them you genuinely their forgiveness and insha’Allah you will be forgiven.

The greatest priority is your parents. There are many children who have conflicts with their parents. How dare you have a conflict with your parents? You have no right to turn your back on them. Kiss their hands and ask for forgiveness. If your heart is not full of mercy towards your parents, you will not have tawfiq in your life.

In the famous but weak narration Jannah is beneath the feet of a mother, however in the authentic narration is that parents are the gate of Jannah.

The father is the middle of the gates of Paradise, so keep to this gate or lose it. (Tirmidhi)

You are lucky if your parents are still alive. Before it is too late, seek their pleasure do not let them pass away with anything in their heart against you.

May Allah Almighty forgive all of us and enable us forgive others. Ameen.

Transcribed by A Khan 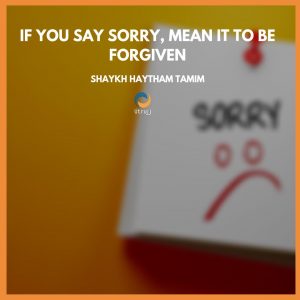