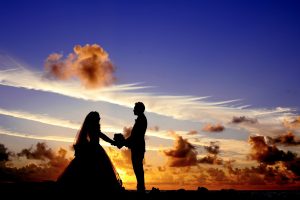 ‘Do not marry unbelieving women (idolaters/mushrikaat) until they believe; a slave woman who believes is better than an unbelieving woman even though she allure you. Nor marry (your girls) to unbelievers until they believe: a man slave who believes is better than an unbeliever even though he allure you. Unbelievers do (but) beckon you to the fire. But Allah beckons by His grace to the Garden (of Bliss) and forgiveness and makes His Signs clear to mankind: that they may celebrate His praise.’ (2:221)

Deen takes precedence over all other factors

One of the companions of the Prophet (peace be on him) wished to marry a non-believing woman of great beauty and that is the background of this revelation. It is a reflection of the level of the companion’s imaan, that he deferred to the Prophet (peace be on him). Allah Almighty sent this verse (which is a verse of ruling- an ayat ul ahkam) to educate Muslims that having tawheed (believing in One God) raises one’s level above any other criteria, including looks, wealth and status.

Marrying a slave (in our context anyone with less social status) is better than marrying one who does not worship Allah Almighty alone, even if you find the latter more beautiful. Thus Allah Almighty is guiding us toward higher principles.

Like the verses on hijab, alcohol, adoption and riba, rulings on these matters were introduced with ‘tadarruj’ or gradualism. The actual prohibition on marrying non-Muslims only came after Allah Almighty had instructed believers and set the scene for the unequivocal ban.

Such a dramatic upheaval of social norms was only introduced once a minimum level of imaan had been attained in hearts and minds of the community in Madinah.

Marrying People of the Book

Though there is a clear prohibition on women marrying non-Muslims, for men, the ban on marrying ‘mushrikaat’ excludes the People of the Book (the ahlul kitab), even though they commit shirk. It is explained in more detail in Surah Al Maidah:

‘This day are (all) things good and pure made lawful unto you. The food of the People of the Book is lawful unto you and yours is lawful unto them. (Lawful unto you in marriage) are (not only) chaste women who are believers but chaste women among the People of the Book revealed before your time when you give them their due dowers and desire chastity not lewdness nor secret intrigues. If anyone rejects faith fruitless is his work and in the Hereafter he will be in the ranks of those who have lost (all spiritual good).’ (5:5)

Allah Almighty allowed Muslim men to marry the women of the People of the Book in this ayah. Without this verse, there would have been a blanket ban on marrying outside of Islam.

During the time of Omar (may Allah be pleased with him), he and some of the other companions thought it was very disliked to marry from the People of the Book. He asked his ministers to divorce any recent wives from the ahlul kitab as it would set a poor precedent and he prohibited his ministers from marrying the ahlul kitab. He did not extend this to the general population.

This is because the ministers were role models, and he was concerned it might adversely affect the future generation and also because such marriages could compromise the confidentiality of leadership secrets. He took public interest as a source of ruling here. The scholars have therefore concluded that while, in principle, it is permissible to marry non-Muslim women of the Book, it becomes impermissible if there is harm.

There are also many discussions around the ‘People of the Book’ and whether they are different now to the communities then? Trends within Judaism and Christianity, particularly liberal Judaism and the Protestant Church, have moved them away from their original teachings as they modernise themselves to keep up with the shifting morality within society. One wonders if they still qualify under the Quranic term ‘People of the Book’.

In general mixed marriages face many more issues than otherwise and can be a rocky ride no matter how much the couple desire to be together.

In particular two parents following two separate religions are not conducive to a sound foundation for their children. The family emanates from both the husband and the wife.

We must understand how to choose wisely and not just emotionally, as this will create and affect the next generations. Outside the parameters of halal and haram, even though the prohibitions are very limited, the locus of control is left to ourselves to decide.

Why can men marry non-Muslim women, but not vice-versa?

Allah Almighty has put in place a structure for us to follow. The family is the most important cell in the community. Within the marriage, the man is rabbul bayt – literally, the Lord of the house. It does not mean that he has been made a dictator for the household, however, the responsibility of leadership and management has been allocated to him.

Though a couple should live in harmony and decisions should take into account both partners’ thoughts and feelings, in final matters women should be supportive of their husbands, otherwise they are committing sinfulness (ma’siyah). Thus, a man can marry from the People of the Book, as his wife is under his guardianship.

Moreover, he respects all the prophets and messengers (upon them be peace), whilst her faith does not accept his. In this scenario, he would respect her religion whilst maintaining authority according to Allah’s law and Final Message. Conversely, if a believing woman was to marry an unbeliever, he would have authority but would not respect the entirety of the prophets, which could cause difficulty in her deen.

What if she is understanding and respectful? Even here, the reasoning would not differ as this is a command from Allah Almighty and the rules are set for everyone, so we do not have the permission to change them to suit exceptional cases.

What happens if a woman married to a non-Muslim converts to Islam?

If two non-Muslims were married with children and the wife became Muslim, there are seven different opinions on how the new Muslimah can proceed in the relationship, depending on the situation and whether the couple live in a Muslim or non-Muslim country. It does not mean that she has to walk out on her husband and children. According to the European Fatwa Council, one opinion is that she can stay in the marriage if she hopes that he will come into Islam. This is based on the opinion of Ali (may Allah be pleased with him).

What happens if a Muslim woman marries a non-Muslim man

Sometimes we ruin our akhirah for the sake of our whims and desires. In the scenario where a Muslim woman marries a non-Muslim man and believes this is permitted, this is an act of kufr, as it entails changing halal and haram. If a Muslim woman marries a non-Muslim man knowing this is a sin, she is in a state of major sin. The consequences of this marriage are they are committing zina and their children are illegitimate.

It is better to rectify this by bringing him to Islam first. Though some say there is no evidence for this in the Qur’an, it is clear from the practice of the Prophet (peace be on him) and his companions and therefore we have ijma (scholarly consensus) on this issue.

In Sunni Islam, rulings are derived from agreed upon sources – Quran, Sunnah, ijma (consensus) and qiyas (analogy), as well as additional sources which are not agreed upon across the four main Sunni schools. There are over 17 such sources, including maslaha mursalah (public interest), aml ahlil madina (the practice of the people of Madinah), istihsan, and so on.

Though the temptation to marry someone who is not Muslim can be overwhelming, someone in this predicament needs to look beyond the grips of unrelenting yearning to his or her future (not just worldly but also everlasting), the impending strain that would be on their marriage, and the repercussions on their children and families. It may seem as if no one as perfect for them as the one they like exists, however in the eyes of Allah Almighty the criteria for the perfect partner begins with the one who is Muslim.

Saving a Marriage when it is breaking down

Why Scholars Differ – Definitions of Fiqh and Shariah

7 Tips to Make a Marriage Successful

Do not mistake staying in a bad marriage for sabr