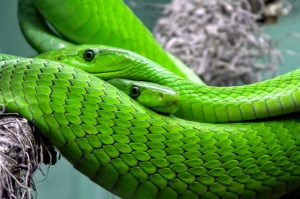 Hasad is a feature which is built in our system – ghaira (jealousy). Pre-progammed within us, as a factory setting. Some manage to minimise it while others super-boost it. It has a switch off button, as well as a switch on button, but in fact, though you cannot get rid of it completely, you can train yourself to control it and live with it.

Hasad (envy) leads to nadhar or ayn (the evil eye). Don’t exaggerate the effects of hasad and blame every twinge and accident on hasad, but don’t reject the concept as nonsense either.

Though some like to reject the reality or effect of the evil eye as a figment of the imagination, Musnad Ahmad narrated  ‘al aynu haq’  (the evil eye is true): The evil eye can make a camel die and be cooked and make man die and go to his grave.

The more one is in the public eye, the more angelic bodyguards they need, so they need to make an effort to protect themselves. And more you put yourself on social media the more you will incur hasad as well.

It is not just envy that can cause damage, but the feeling of amazement that we can feel when something particularly beautiful or impressive strikes us and in this way, we can put our own nadhar on our children, so remember to always say mashallah or mention Allah’s name as that is your shield which protect yourself, your children, your possessions and other from the evil eye. Remind people when they say ‘wow’ as protection comes from being in a state of mindfulness of Allah Almighty rather than ghafla (heedlessness).

Protection from the Evil Eye

There is no need to go beyond reciting the Qur’an in protecting yourself. Practices such as burning chillies to remove ayn are unnecessary and rooted in ignorant practices.

The Protection of Humility

Real humility protects you. Not boasting and showing off which are not Islamic behaviour. There is no need to show your private life to people. These days even celebrity shayukh are succumbing to social media.

We learn humility through the right people. An example is an old man who would distribute water to attendees at their regular gatherings. He was so modest Shaykh Haytham would feel like giving him some charity. The students didn’t know who he was. In fact, he was a great scholar who had written books and taught graduate students, yet he was genuinely humble he did not draw attention to it.

There is good envy as well as bad envy. Hasad gibta is good envy. It is acceptable to envy someone’s knowledge and wealth if they distribute these in goodness and you wish for the same without wanting to decrease their blessing.

It was narrated from ‘Abdullah bin Mas’ud that the Messenger of Allah (peace be on him) said:

No matter how pious or knowledgeable you are, you cannot be stripped from your emotions as a human. This is our nature, otherwise we would be robots. Some of us are more jealous than others. Having no jealousy would not be normal, however having excessive jealousy is wrong, and to wish for someone to lose their blessing is haram.

Instead of feeling envy, work hard on yourself through being inspired by someone’s good deeds, knowledge, charitable deeds. Don’t wish to take his position or his money away from him. This is unacceptable. Have a good intention – not a bad intention. 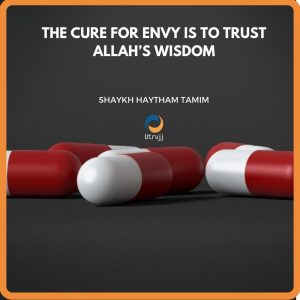 Sometimes people can’t help their jealous reaction when they see something they like, internally they are questioning why did they not get what the other person has.

It is the hikmah (wisdom) of Allah Almighty that He destined certain gifts would be given to certain people, whether these take the form of provisions or intelligence or fortune or status or offspring etc.

Allah Almighty decided, as per the hadith recorded by Bukhari, Muslim and Nawawi that four things are decreed before your birth: rizq (provision) , ajala (lifespan), amala (actions), and whether you will be shaqqi (unhappy) or saeed (happy) in your final destination.

On the authority of Abdullah ibn Masood (may Allah be pleased with him), who narrated that the Messenger of Allah (peace on him) said:

Therefore envy is connected to knowing Allah. We trust Allah’s knowledge and we have to accept the qadr of Allah. He decided some will be rich and some poor. This doesn’t mean we do not strive to improve our situations. Who said you can’t change your status? The Alibaba empire was created by a poor person and is worth 1 trillion Dollars. It was created from scratch. If its founder sat and waited for his qadr he would have stayed poor. We write our destiny through our choices. You may be anything one day, but tomorrow who knows? So try and achieve whatever you can. And see what happens.

You can work on yourself, on your business etc. And of course, making sincere du’a can change your qadr.

If you want your rizq to be increased, connect your blood ties. You need to do your best to break the ice when relations have frozen. This requires sacrifice. Nothing comes free. Just as we have to pay even for parking, we need to strive for jannah which is priceless.

Hasad can ruin your life. The core of hasad is being dissatisfied with Allah’s will. But the cure – and consequently the tranquillity and peace in the heart, comes when you understand that it is Allah Almighty in His infinite wisdom who distributes everything.

Based on the Tafseer Class of Shaykh Haytham Tamim – October 2018

The significance of the Ayatul Kursi – a powerful du’a