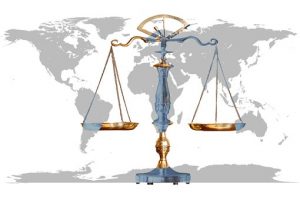 O you who have believed, be persistently standing firm in justice, witnesses for Allah, even if it be against yourselves or parents and relatives. Whether one is rich or poor, Allah is more worthy of both. So follow not [personal] inclination, lest you not be just. And if you distort [your testimony] or refuse [to give it], then indeed Allah is ever, with what you do, Acquainted. (4:135)

The call to believers ya ayyuhal ladheena amanu is an indication that a serious announcement is following – either a command or prohibition. Allah Almighty uses this personal call to appeal to the hearts of believers to prepare them for what follows.

In this ayah the call is followed by a command to be upholders of justice, even when this means going against your own interest or that of your parents or relatives.

We have seen this command many times in the Quran e.g. in Surah Maidah:

O you who believed, be persistently standing firm for Allah, witnesses in justice, and do not let the hatred of a people prevent you from being just. Be just; that is nearer to righteousness. And fear Allah; indeed, Allah is Acquainted with what you do. (5:8)

Here, we are being warned not to let animosity towards certain people to drive us away from being just.

If you dislike someone or hold a grudge against someone, when you are in a position to judge, naturally your judgement would be inclined to go against him, and deny him his rights. This is haram prohibited.

Or if a case involves your close relatives, how will you judge? Will you allow your emotions to control you? Or would you let justice take its course?

Jahiliya dominated people’s mentality. They were taking baby steps towards the truth and towards real justice. They were being taught to fight culture when it contradicted justice and Islam, even though this practice was common place. It was in this atmosphere that the verses were revealed. 1400 years on, we are not that far from that atmosphere of ignorance and sadly, culture, ingrained habits and preferential treatment for relatives still control the scene.

Those who feel that Islam was revealed for the people of the desert 1400 year ago should realise that we have the same circumstances and Islam is not limited by time or place. It is the final religion. There is no time limit for Islam to expire or geographical location for its application – the universality of its message makes it suitable for everyone for all time. It is not tailored to a particular race or people.

The word qawamina bil qist, is often translated as ‘upholders of justice’ but grammatically is a form which is siaghul mubalagha i.e. being continuously done  in abundance. English does not do justice to its meaning, which is deeper in Arabic. In Surah Nisa, men are the qawamun of women, the ones who keep standing and guarding them, i.e. supporting their wives. It is not a one-off action. It indicates a regular occurrence, which is embedded in their system. It is not in their external hard disc but internal, so deeply rooted, that it cannot be removed. Similarly, we have to be always qawameen bil qist, (upholders of justice) as this is part of our Muslim identity.

To support the concept of justice, Allah Almighty linked it to Himself. Shuhada’a lilallah, we are witnesses for HIM. When we have an unresolved case or a conflict, we need to resolve it. We need justice. How do we usually deliver justice? Everyone puts their case forward, brings their proofs, witnesses, statement etc.

As it is possible to bring fake witnesses and falsify a case, Allah is Almighty is warning us that He is witnessing it. This is terrifying.

Ensuring your testimony is honest

We have to be absolutely fair in our testimony and in judging – to the extent that if our parents have been in the wrong we have to speak out against them and let justice prevail.

Allah Almighty is emphasising that if we say anything false, forge or fake testimony or proofs we may fool the judge but we cannot fool Allah Almighty.

The Prophet (peace be on him) stressed that the onus of telling the truth lay with the plaintiffs and defendants – he said that he could only judged based on what he heard:

You refer your disputes to me and I am only human. Perhaps some of you may be more eloquent in presenting your case than others, so I rule in your favour because of what I hear from you. If I pass a judgement in favour of one of you that detracts from his brother’s rights, then he should not take it, because it is a piece of fire that is given to him which he will bring forth on the Day Resurrection. (Bukhari).

It might be that some were more eloquent than others in presenting their case, therefore they bent the truth and swayed justice. The Prophet (peace be on him) warned them that though his judgement would be based on the evidence he received from them, if there was a miscarriage of justice resulting from it, and one party took the rightful shares of the other, those shares would be of jahannam for the one who knowingly took what was not his.

An example of this is if two brothers bought a property but only registered it in one brother’s name and the whole family were aware. However, when one brother passed away his children did not give his share to his family, but kept it for themselves because the documentation was in their father’s name, this is haram. It is between them and Allah Almighty and Allah Almighty has witnessed their sin.

Even if the outcome goes against yourself or your family be careful. You may be torn between doing birr to your parents but if they are in the wrong, for example they wrongly took someone’s money and asked you to witness that they didn’t, it is not birr to protect them. It is haram. They may go to prison, but that is what they earned. It is better that they receive punishment in dunya, than the fire of hell. Parents have rights over us, but Allah’s rights are more important than our parents.

There is no room for laxity in financial matters. You cannot be careless or negligent about them. If you wronged someone financially, you are not forgiven till you return what was rightfully theirs.

Four factors commonly divert us from justice: self-interest, parents’ interest, relatives interest and the financial status: rich or poor. These can drive someone off the track to protect them. Allah Almighty has identified the main entry points that shaytan sneaks through. Allah Almighty has stated that justice prevails over all interests.

Justice is the main characteristic of a believer. Justice doesn’t only matter when it is related to someone else, it applies to everyone across the board.

In the hadith the Prophet (peace be on him) highlighted that it was wrong for justice to be distorted due to wealth, nepotism and influence, and that if his own daughter stole, she would be treated with the same laws as everyone else:

Those who came before you were destroyed because if a rich man among them stole, they would let him off, but if a lowly person stole, they would carry out the punishment on him. By Allah, if Fatimah bint Muhammad were to steal, I would cut off her hand.’ (Bukhari and Muslim).

If it is haram, it doesn’t matter how many stickers you put on it, it does not make it halal.

Injustice due to culture

Injustice is often prevalent due to cultural thinking and practices. In many Muslim places, women are still denied their inheritance when they get married, because families want to keep their wealth within their family and are concerned that it will ‘go to a stranger’ i.e. her husband if she receives her share. This is completely haram.

Silence is not innocence

Staying silent is culpable. Speak out when justice needs to be done. Allah Almighty has asked us to be witnesses for the truth and to deliver testimony. The bottom line is that we have to stick to principles. Live by them and die by them. They are not seasonal. You can’t put them on in winter and take them off in summer.

Having the courage to testify against those with power

How can I testify against this rich powerful person? It is not easy to take stand against someone in authority. He might be your boss or a leader.

You might also neglect to testify because someone is poor. Regardless of who he is, you have to fulfil your part to ensure that they are dealt with justly. Justice is for everyone. Justice has no colour. Justice has to be equal for the rich and the poor.

Allah Almighty does not judge you according to who you are or what you have, but by your deeds.

Allah does not look at your appearance or your wealth, He judges what is in your heart.

Abu Huraira reported: The Messenger of Allah, peace and blessings be upon him, said:

Verily, Allah does not look at your appearance or wealth, but rather he looks at your hearts and actions. (Muslim)

The ayah is scary because our own instincts are not always to stand up for what is right. Twisting facts, blurring the reality and not giving evidence, which is the speciality of spin doctors, perverts justice.

It is warning to oppressors and lawyers not to distort the truth, or change the narrative or use technicalities to get the guilty off.

Is the aim to serve justice or to convince the jury?

Ultimately it is justice that matters, so be wise rather than naïve in telling the truth and do not create greater problems through your testimony. Whatever you do Allah is fully aware.

The Law of the Jungle

The core of justice