Lessons from Ibrahim (peace be on him) 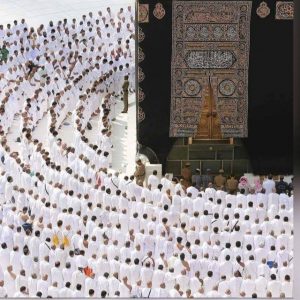 And [remember] when We made the House a place of return for the people and [a place of] security. And take, [O believers], from the standing place of Abraham a place of prayer. And We charged Abraham and Ishmael, [saying], ‘Purify My House for those who perform Tawaf and those who are staying [there] for worship and those who bow and prostrate [in prayer].’ (2:125)

And [remember] when Abraham said, ‘My Lord, make this a secure city and provide its people with fruits – whoever of them believes in Allah Almighty and the Last Day.’ [Allah Almighty] said. ‘And whoever disbelieves – I will grant him enjoyment for a little; then I will force him to the punishment of the Fire, and wretched is the destination.’ (2:126)

Allah Almighty chose Ibrahim (peace be on him) and appointed him as a leader, prophet and messenger, and through this He elaborated on the characteristics of leadership and the lessons we can learn from it.

Ibrahim (peace be on him) was tasked with the purification of the Kaaba to physically clear it of idols and filth, as well as establish spiritual monotheism – to build people’s belief and connection with Allah Almighty.

The Synergy of Young and Old

The obligation from Allah Almighty to establish the Kaaba was allocated to both Ibrahim and Ismael (peace be on them). Through the generation gap between the elderly Ibrahim and the youthful Ismael we have a beautiful lesson in the powerful synergy of wisdom and knowledge from the father and energy from the son. In our community we need to combine these two features. We should bridge the gap between them, so our elders and scholars join forces with our youngsters.

The Importance of Acceptance

And [mention] when Abraham was raising the foundations of the House and [with him] Ishmael, [saying], ‘Our Lord, accept [this] from us. Indeed You are the Hearing, the Knowing. (2:127)

As they reached the end of their task, father and son completed it beautifully with Ibrahim’s (peace be on him) humble supplication ‘rabana taqqabal mina’ (O Allah Almighty accept it from us). From his example we learn to do the best to perfect our task, and to realise that the essence of the task is not its external aspect, but the core of any task is gaining Allah Almighty’s acceptance. Whatever you do, do it with purity and devotion for without doubt the ultimate aim is acceptance (qabool) from Allah Almighty. Piles of deeds are worthless if they are rejected. Unless is has been accepted no matter how big or small it is, is inconsequential. When Ibrahim (peace be on him) asked Allah Almighty to accept their humble deeds, he recognised that it was Allah Almighty, who had supported them with energy and power to perform the task in the first place.

Our Lord, and send among them a messenger from themselves who will recite to them Your verses and teach them the Book and wisdom and purify them. Indeed, You are the Exalted in Might, the Wise.’ (2:129)

The second supplication of Ibrahim (peace be on him) was for Allah Almighty to make us submissive to Him and to send a messenger from his descendants that community. Ibrahim (peace be on him) is the leader of the generation, the ummah and the community. He shows real vision and his ikhlas (sincerity) shines through. Without comparing him to the leaders of today, who fake their concern for victory in the elections, Ibrahim (peace be on him) has genuine concern for future generations. Due to his deep ikhlas, conviction and commitment, he is not just satisfied with his achievements but worried about future generations. He asks Allah Almighty to keep the goodness for generations till the Day of Judgement. His vision is not limited, as the Arab saying goes, to one who ‘can’t see beyond his nose’. He is looking ahead at who will come afterwards. He is asking Allah Almighty to facilitate good generation with imaan and ikhlas and conviction. It is genuine, not an empty election-wish, forgotten as soon as the elections are over. Sincerity speaks louder than words.